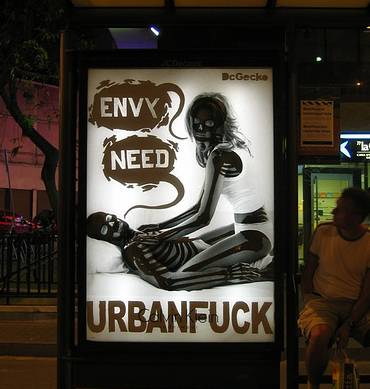 Can you give us a brief rundown of your life up until today? When, where, did you start to work in the streets?
My name is DC Gecko, Docteur Gecko. I was born in “La Réunion”, a french island located in the Indian Ocean. I hijack, hack, remessage advertising that you find in bus shelters. The particularity of my work is that my modifications can only be seen during the night. However, during day time the ad modified seems to be untouched.

Like a lot of us, I started first with graffiti (Toulouse, south of France), nothing really important though. I missed the gold age when it was still “possible” to paint downtown (La trueschool, Miss Van, Weky, Rezo were my favorites). Unfortunately, council from my town adopted a anti-graffiti law. Only a few months were needed to make our graffiti history disappeared. So we got a clean city, and they wanted to let it stays like this, that is: a tag at best stayed 2/3 days. they did a good job (and still does). 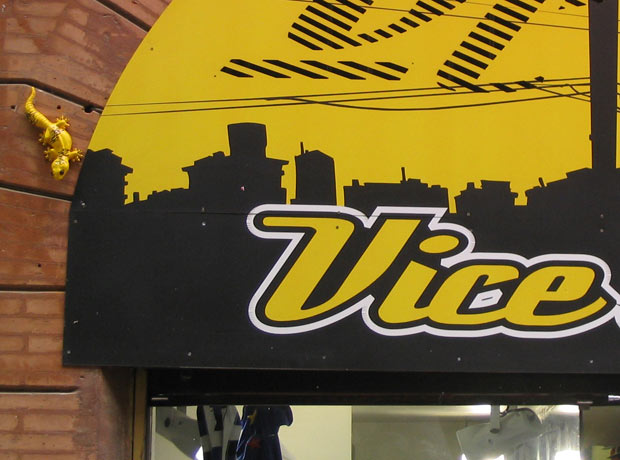 Then I tried to figured out something different for interacting with my city. So without really giving up graffiti, I jumped from spray to mold (around 2003). I made sculptures of a gecko (inspired by a kind of lizard from my island) that I stuck in my city. This new medium open up a new area for me. I tried matching the color, design of my gecko to the environment chosen. Well, this project, did not last very long. Even if I put them hight, people started to steal and more often broke them…
At this time, I was doing some long study, so everyday i took the bus from my house to the university and I start noticing the advertising on the bus shelters. To be exact, I was not really interested by advertising, I was more excited to take the place ot this ad. But later, I found that just putting a drawing into the shelter lasted just a day or two. In fact, JC Decaux (the company that owns the shelters) have some workers during the day. After some experiments, I find a way to be visible only during the night. I was pretty proud of tricking the JC Decaux team so my modification could last a week or more depending on the  turnover ads. So in the beginning it was only about putting my logo (a gecko) whatever the ad was (ex: the easyjet ad). And then, the concept has evolved, my ideas and my productions too.

Have you worked for JC Decaux to learn the tricks to open their bus-stop advertising systems ?
:), well no, but that would be amazing, especially that now they have some new shelters, I should give it a try. Actually, Internet was the solution. I found on a ad-busters forum how to open a model called “sucette”. So I did my simple “key”, and still use this one in different cities.

Then later I saw the really cool work from the MC crew in a bus shelter explaining how to open a more complex shelter in a ikea-like manual (http://ouvresa.tk, we all (should) know this one?! ).

Kaws has been known for his work on bus shelter posters. Did he influence you in any way ?
Well it’s not because of his early work that I wanted to work onto advertising, if you want to know. As I said, in the beginning I wanted my stuff to be a bit longer than 3 days in the street. I guess, if my city did not adopt this anti-graffiti law, I would still do graffiti or sculptures on wall, or something else. It was the frustration of not being able to express myself that leaded me to hack advertising, a kind of adaptation to the constrains of my city. However, I knew that working on these ads was not an original idea, but at that time, I was not aware that he was the first and that he did open a new area for others. 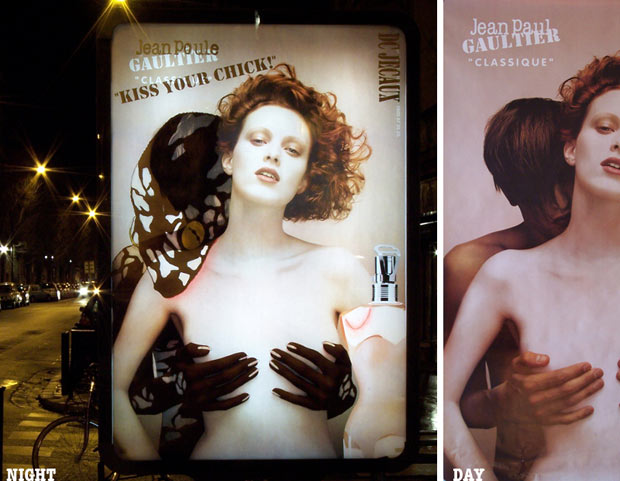 You are born in Reunion Island. Jace who live in Reunion also painted a lot on billboards. Same question, did he influence you ?
We cannot not be influenced by Jace, we can only rip him! :)

I’m a huge fan of his work and of the fact that he can bring a humoristic wink on some important society’s problems.  He has a strong sense of humor, something I wish I have :).
More generally, I’m inspired by people who bring in their work a wise critic of our society, the way we live, etc… Ron English, Akay & Peter, Darius Jones, JR, Banksy to name a few. I’m also really interested by works with several meanings, different readings, hidden messages like ambigrams, anamorphosis etc…

When you see an ad, do you bring it at home to work on it ?

For the moment, I need some preparations. What I want do do (ideas) and how to achieve the modifications (technics) need times, so usually “yes”. But for some specific future projects, it will not be necessary. 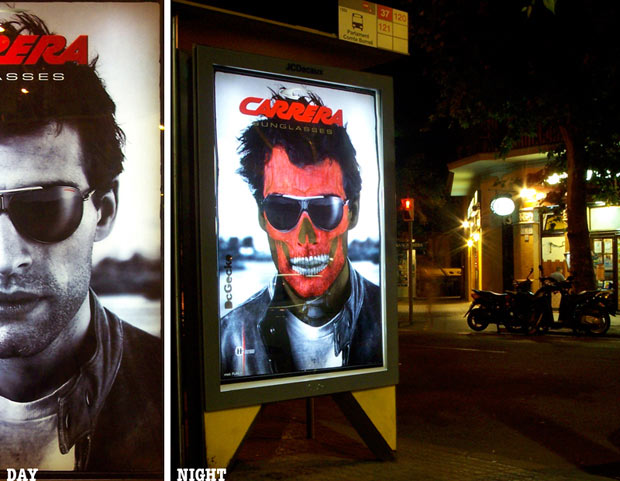 Your work can only be seen at night. That’s the beauty and the strength of you project, but at the same time aren’t you afraid people don’t notice your work ?

As you said, what I do can only be seen during the night but the interesting part of it is that:
* It tricks JC Decaux since they don’t see that their ad are manipulated and then don’t replace it. And it’s always pleasant :)
* It’s like showing the Dr Jekyll and Mr Hyde. I like the similarities between this concept and the fact that at night the city changes (it’s “scary”, new people hanging, “unsecured”, there is a new kind of life, a new reality etc…).
* It’s also a wink to the wast of energy. In fact, my modifications can be seen only during night time because the city wastes energy lighting the shelters. No light, no DC Gecko. I’m wondering what is the impact of such lighting in our environment. Don’t you think it is hypocrite to ask us to take care of our energy because we are fucked up and in the meantime to waste so much (oh yeah, cash rules everything, unfortunately).
When I place a hacked ad, I like staying around to see the reaction of people. And even if they are “anesthetized” by the load of stimuli from advertising, they are surprised by what they see. they wonder if it’s a real advertising, how it is done, etc..  It get noticed if the new message, image is incongruent with what people are usually confronted. For example, that was not the case for the Nissan micra’s ad, the tattoo was too much integrated to the ad. But, in most of the case, I’m sure the modified ad are much more noticed than the original.
However, I don’t know if it has an impact. I hope people start noticing what goes around, how outdoor advertising is defacing our city, the lies behind the ad, etc… As I do, now that I’m working on this. But I guess I’m dreaming. 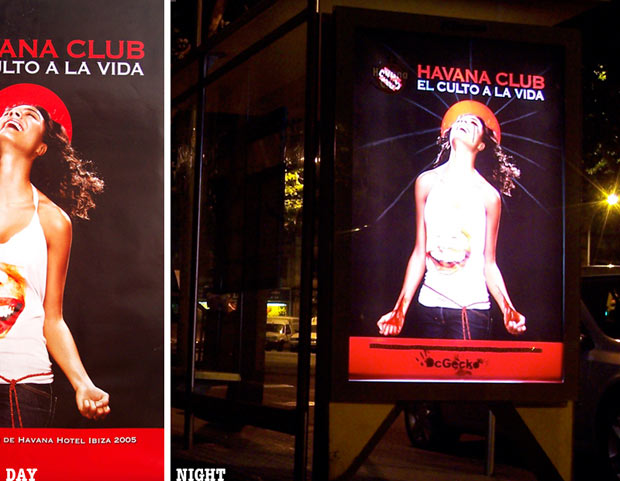 There is now a real little community of French street-artists living in Spain. How did you land in Madrid ?

Well, after my long study, I needed some vacations and doing something different. One day, a friend of mine asked me if I would like to come in Barcelona… what would be your answer ? Then later, another good friend asked me if I would like to come in Madrid… So, i said “yes, let’s do it”.
It’s easy to understand why spain is so attractive: life is a bit less expensive, spanish people are really friendly and spend more time in the street than in their house, artistically speaking there is a lot of stuff going on here (in galleries, in streets, magazin etc..). And I’m not talking about “Fiesta”: Spain is definitely “campeon Olimpico”! Also, being part of another culture is really exciting. Just make a try, and you will understand it.

Do you have connections with other “urban artists” in Madrid ? (somewhere else ?)

Well, hanging with friends like Miss Van and the Limbo family in Barcelona let me met some cool artists like JR (Fr), Jace (Rn), Alexone (fr), Nano 4814 (mad), el Tono (mad), Sixe (Bcn), Raul de Dios (Bcn). During the Intermix 07 in Taiwan, i spend some days with “the crazy duo” Tilt and Mist, “mysterious” Honet, “queen” Klor and artists from Taiwan like Kea, Colasa, Dzus, Bobone, Bounce, Reach and Sense (Japan), we had an amazing time. 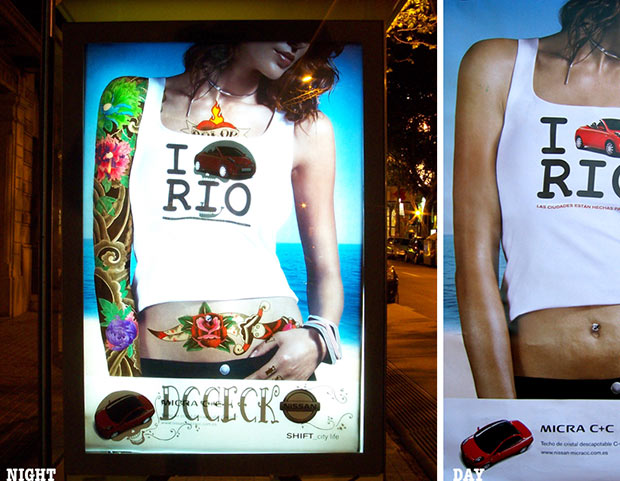 Any plans for the future that you can tell us about?

yes sure! I’m planning to work for JC Decaux and make a movie called “Super Advertise Me”. Stay tune ;).

According to you who should i interview next for ekosystem ?

mmm.. there are so much but maybe some who are not well known here: Reach (Taiwan) and Sense (Japan) about the history of graffiti and what’s going on in their country. Other artists from la Réunion would be great!
DC Gecko on Flickr
DC Gecko on Fotolog

10 new photos by  hyperactive Mouse from Varna on the Bulgarian Black Sea Coast.

Nerone in Bordeaux, London and Senegal.