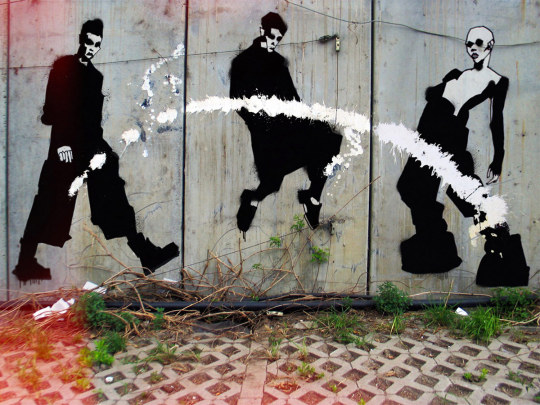 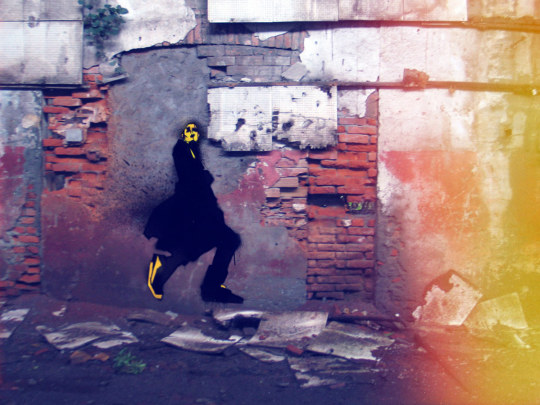 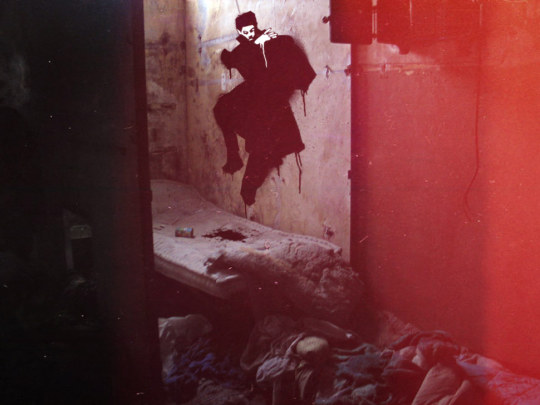 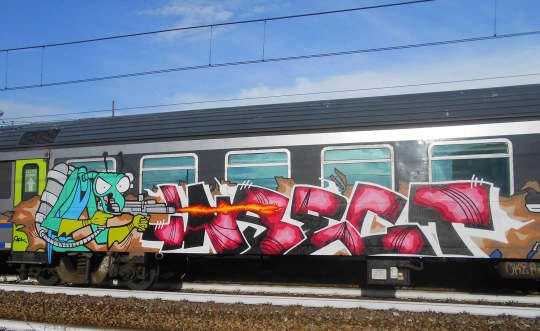 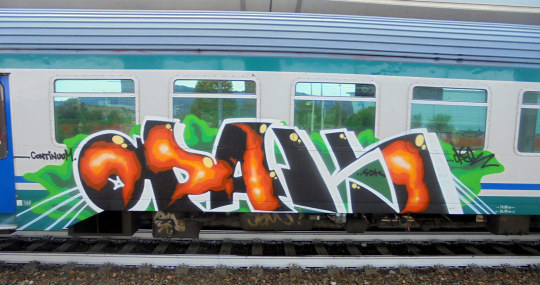 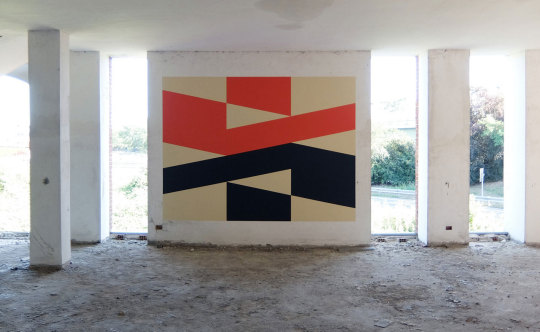 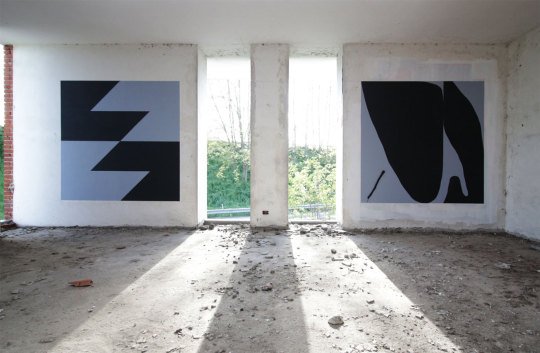 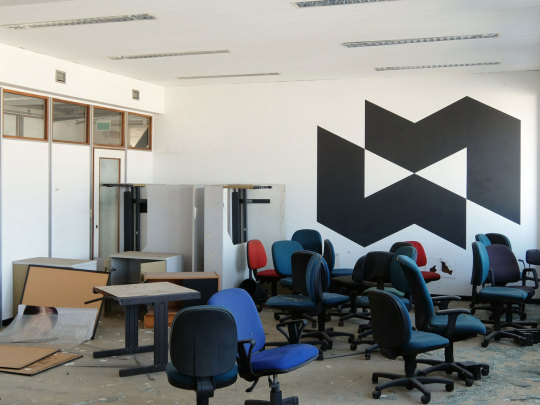 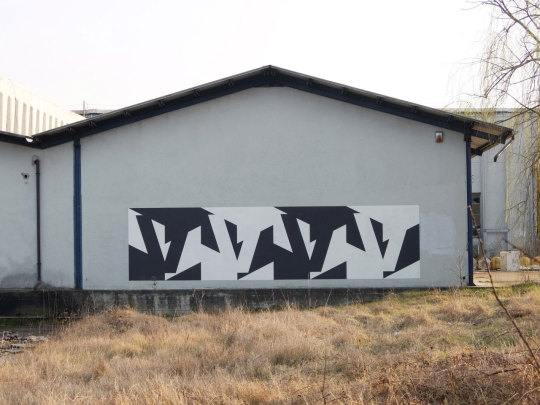 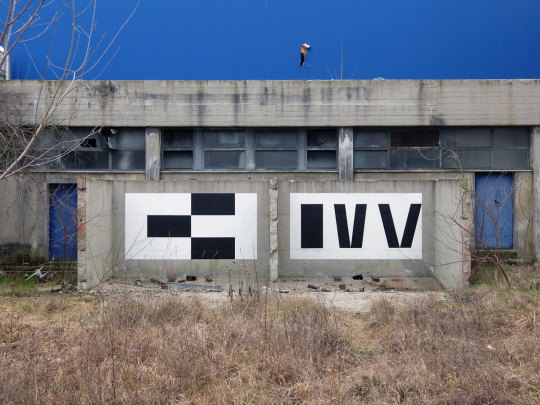 6 walls CT and Vostok painted together. 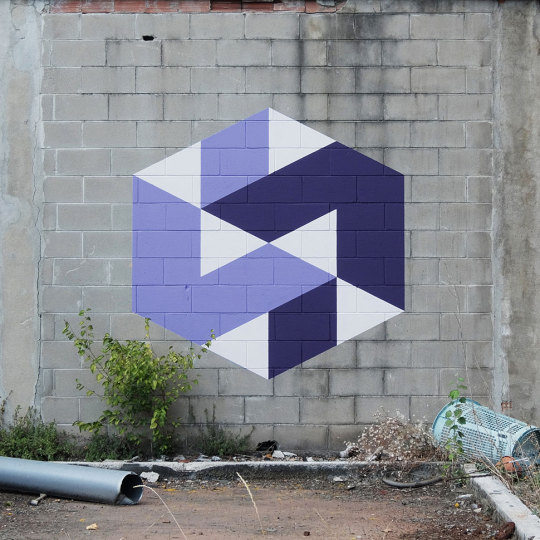 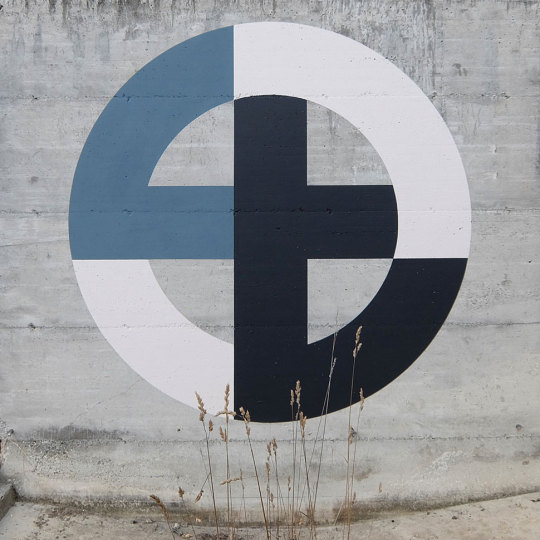 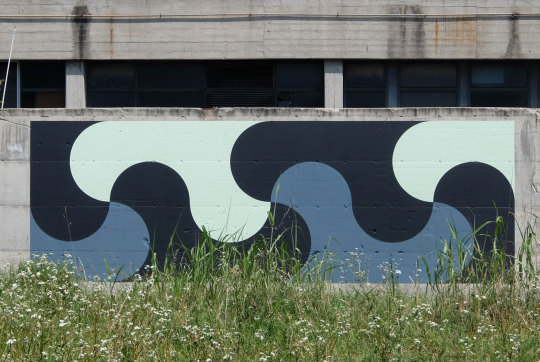 9 photos from the italian minimalism king : CT
More to come in the next few days. 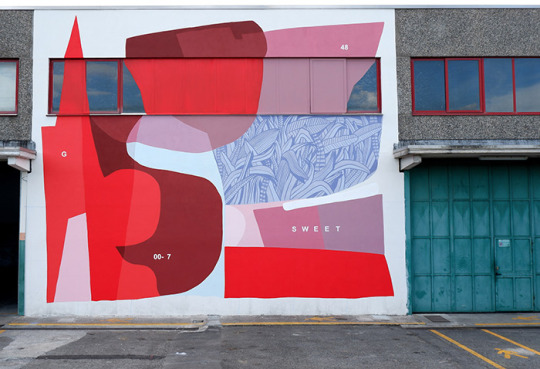 With the help of Google Maps, Biancoshock updates the road sign indicating a more realistic route of the next kilometer of your life. 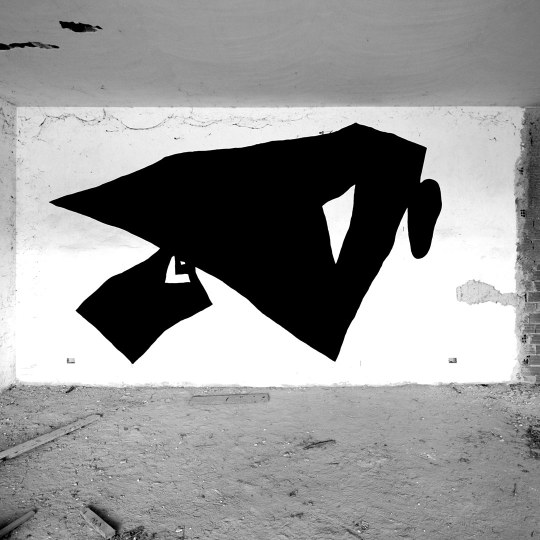 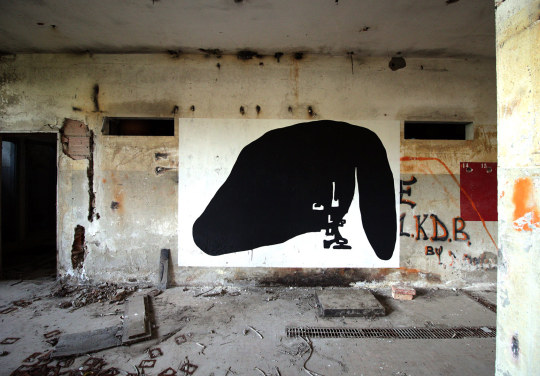 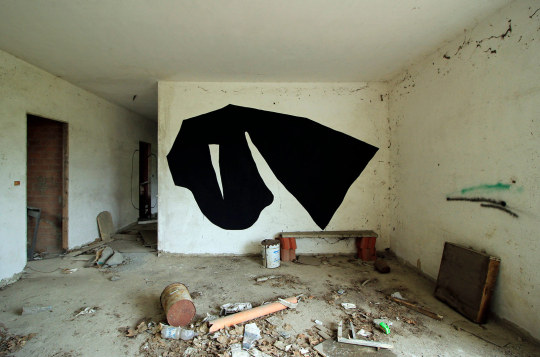 6 photos added to the 108 photo gallery started 18 years ago. 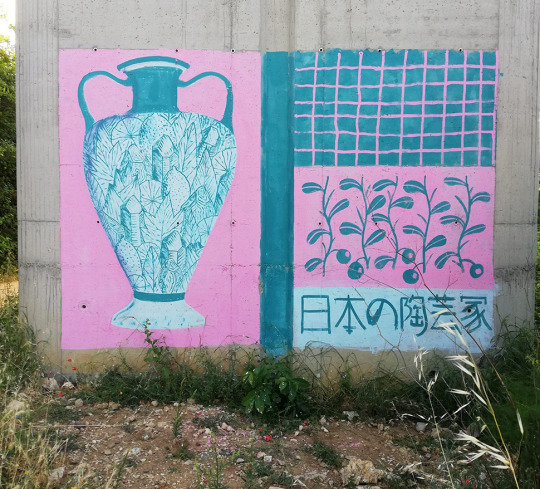 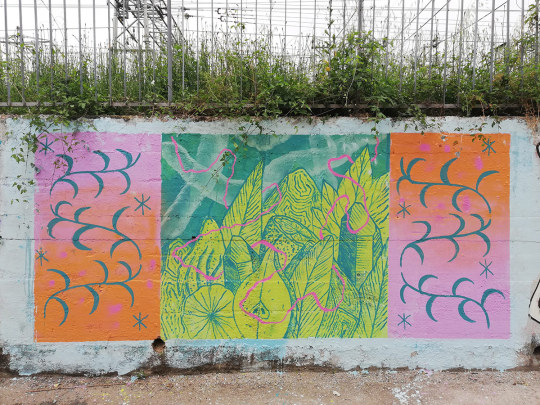 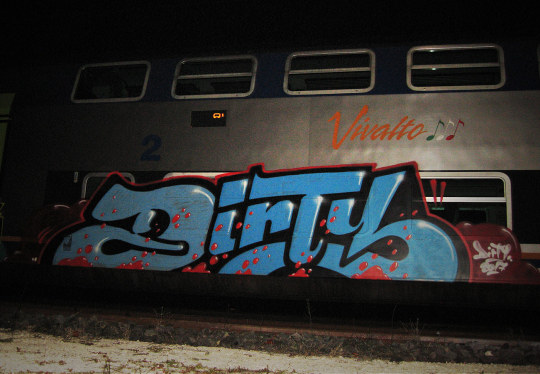 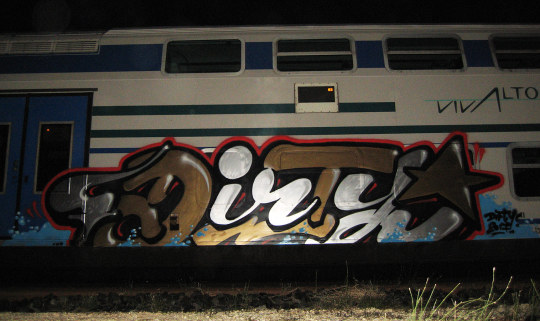 6 new pieces by Dirty in the ltalian night.

Today’s message by Guido Bisagni aka 108 who is probably one of the first ten person I had a contact with via ekosystem.org about 20 years ago !

108: “This is the 4th weeks of “quarantine” at home, I go outside just one or two times every week to buy food at the supermarket, the situation here is not as bad as it is in Lombardy, but we are very close, the province is on the border and the Hospitals here are collapsing too. Luckily we live in a country were the health system is public, maybe it’s not perfect, but they are doing everything they can, at least on this area, but the situation is so bad that places inside hospitals are not enough and they are working to make new places everyday, even masks and gloves are not enough. I can’t imagine how terrible must be this situation in countries with a weaker health system or in the USA. People don’t understand how bad this virus is until they don’t see it coming closer: there is no more space for coffins at the cemeteries and crematoriums and they are stocking dead people inside the churches, now, near home. What shocked me is to see people everywhere saying: “ it kills just old people” or things like that, like if your parents and grandparents dies is not important. The fact is also that if you are young and you can’t find a place at the hospital with very important cures, you die anyway. You die completely alone and you have no funeral. Now I stop with this horror, it’s different when it’s near home and that’s not a scifi movie, I just wanted to say that because people seems not to understanding it, even in Italy where the situation is not too bad.

There are some “good” side anyway: there are almost no cars outside, no noises, I live in the centre of the city in the most polluted area in Europe and I never felt the air so clean. I can hear birds singing in the morning. I hope we can learn something from this situation, in many ways, but obviously I don’t know, the economic crisis will be the biggest problem after this.

Ok, what I’m doing now? To be honest I do what I usually do in the 90% of times when I’m not travelling and to be honest I was a little bit tired of travelling recently. I work alone in my studio, luckily inside my home, with my cats. Usually I see my girlfriend few days in a week, because during the week she works in Milan, but luckily she can works from home (for more than one month now) so, I’m not alone. Here it’s still cold outside, this morning it was 2°c on my balcony, so staying at home is not so bad, I don’t miss too much going out for drinking stuff, I save some money and I don’t miss too much social contacts, in fact I avoid video meetings too. It was a long time I wanted to stop a bit drinking beer and stuff, so I haven’t a drink since the first day of quarantine. I’m enjoying a lot green tea and other infusion, I’m cleaning myself a lot. What I miss too much is going to hike, to ride bike on the countryside and a real contact with nature outside, this is the part I really miss. I can’t wait to go back in some old factory around here with friends like CT or Eleuro, but, after years I finally have some rest too, I can read some of the thousands of books I bought during the years, watching movie, working on stuff just because I want to do it.

I’m listening to a lot of music, as usual, but this period changed my playlist a bit. I almost stopped with heavy/fast stuff, I’m listening to a lot of traditional japanese stuff, koto for example, I always liked that stuff, but now I can really listen to it for all day long. I’m making a lot of research on youtube, the only social I like, to find new things: shinto-imperial music, it’s very hard to find, because I don’t know japanese language, but with a lot of patience I can learn something. Also indian ragas, sitar stuff, and a lot eastern classical music. Than I listen to some classical stuff too, Purcell is always my favourite, tons of stuff, a lot of Jazz. When I cook and we eat we listen a lot to the classics like Miles Davis or Coltrane, but my absolutely favorite now are Pharoah Sanders and Sun Ra, unfortunately I’m ignorant about Jazz in general, so I’m listening to it in a very spontaneous way. I’m listening to a lot of ambient music, some old traditional stuff of my region that’s very very hard to find (sometimes it sounds like irish stuff, crazy!) and obviously to the usual music I like: post punk, new wave, experimental… but less. When I’m working I watch, or better I just listen, to a lot of documentaries. Expecially historical stuff, anthropological stuff.

We are watching a lot of movies and some series. I see everyone is 100% on Netflix, I must say some series are fine, I totally like the new one about Freud few days ago. But to be honest I prefere other stuff, I prefere non-american stuff, old tv series and films. Untill the 80s public italian TV produced some of the greatest masterpieces ever, so I can give you some advices, if you find them: The Odissey, by Franco Rossi (1968, 8 episodes), if you like that kind of visionary/oniric things (and a bit creepy) you should watch Pinocchio (by Comencini 1972, 5 episodes) or, in a way related to the actual situation, I promessi sposi from (1989) with a nice part about the pestilence in Milano.

Last tip, very important to me, for these days is to try mediation and relaxation techniques. I have problems with anxiety, the worst time was 11 years ago, I had to deal with it for years and this kind of techniques helps a lot to exit from those dark times and to stop with pills. Obviously when you are fine you may stop, like me, but right now, in some days anxiety is growing again very high, so I started again, we have a lot of time at home and you can try it. You may think that’s sometimes for hippies, but you must be patient and sometimes you can’t really believe how powerfull it can be and how it makes your life better.”

If you want to learn more about 108 visit his website, his Instagram page and/or his photo gallery on ekosystem.org.

My 3rd guest of this Self-isolation series is Elfo. There are many reasons for admiring Elfo work, but as for me he is one the few who seems to get new ideas every day, from a quick contextual message or drawing, to a train piece or a canvas.
Unstoppable !

ELFO: “As related to the pandemic, I actually live in one of the worst areas of northern Italy, and my city is second most infected in the country.
The situation here is atrocious, too many people are dying everyday.
I’m lucky to live in the countryside in the middle or nowhere. Here, everything is still really quiet.
I’ve been quarantined for three weeks now, but fortunately I can still go out for walks in the nature.
In fact, my life hasn’t changed much, but I now have a different mindset  approaching my paintings. Also the supports have changed, as the shops are boarded up, but in the end it’s not such a big deal, because that gives me the change to investigate on new media and make my brain work harder to find new techniques for future artistic designs.
I’m not speaking directly about this fucking global virus situation through my artworks, but since the end of 2019 my paintings were in a way already reflecting the situation we’re living now: being isolated in a room with death-related skulls and pointers.

I fight everyday with the freaking Spotify free version to listen to different types of music – techno, trap, hip hop, classical, traditional Italian music, punk – all day long. The truth is, I can’t paint without any of this.
I go looking for food around my country house, as nature gifts in this time of the year are very generous, and I find fresh eggs outside my door everyday, thanks to my neighbour (thank you Sergio, and fuck off supermarkets)
I miss my family, my friends and my crew, but luckily we can still see and talk to each other through a webcam, having an “aperitivo” together. It’s very sad, indeed, but it’s still better than nothing.
I’m not thinking about the things I want to do after this time, but I’m thinking at the way people will be forced to change in the future in terms of economics, politics etc. I hope that they will reason in better terms, but I’m honestly not sure.

…………….and I order fucking legal CBD weed on the Internet :(
First of all, my advice would be not to add any bullshit or banalities on FB, none of this crap. I found an absurd and useless hyperactivity on social media.
To get away from all of this, I suggest you to read a couple books: Phaidon’s “bBody of art”, an excellent book describing and analysing the history of body art; “the Manifesto of Futurist Cooking”, a book written by the futurists where you can find a list of dishes using bizarre ingredients and funny culinary combinations.

On Insta for sure follow “Antistylers” page
I then recommend to listen to this album by the Shabazz Palace.
Please, watch “Volevo nascondermi”, a movie speaking of a pure and uncompromising painting (I hope it’s already been translated or has been already subtitled)
I would also add Marx’s classic ‘Das Kapital’, always so beautifully factual.”

If you want to see more from Elfo visit his Instagram page or ekosystem photo gallery.