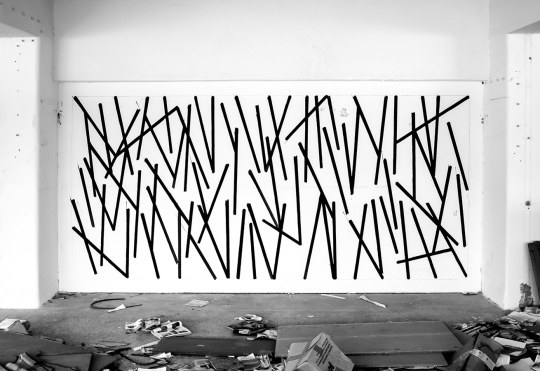 2 minimal pieces by Onebran from Greece.

A photo selection of recent works by Pars from Thessaloniki, Greece.

From bohème to hipster by Cacao-rocks in Athens.

Blaqk latest murals in an abandoned factory in Attica, Greece.

“Smell of a flower”, at Vamvakourgia factory in Volos, Greece by Dreyk the pirate.

– Can you present yourself? How did it all begin? Did you write letters before painting pirates?
Hello
everyone, i work under the name of Dreyk the Pirate and i’m living in
sunny Athens – Greece, working as a designer / illustrator mostly on magazines. It all begun in the late 90’s, with a couple of friends when I started spraying my crew’s name “BTS”. I was always the one from the crew, who drew a character beside BTS. My characters were kinda “comic-realistic” style so after a while i was bored of making shades. My Graphic Design studies and stuff through magazines, books and ekosystem.org, influenced me and in 2004 I started drawing in streets a navy motif. Boats, mermaids, squids, pirates, anything from sea imaginary.
The last years I was using mostly blue and white but since the beginning of 2016, orange replaced blue.

– Your characters look more like fishermen or very nice pirates than actual dangerous pirates. What attracts you to pirates ?
I draw mostly fat sailors nowadays and yeah, they look pretty far from dangerous. Actually, everything i draw looks childish and cute.

Dreyk the Pirate and
Antios

– You paint most of the time in abandoned house in broad daylight in
Athens streets. Is Athens as open as it seems to street painting?
Well, that’s the thing about Athens… Athens is full with old abandoned houses, and i prefer that because (almost) no one gives a shit. Also I love the textures of old walls. So, the reason i prefer doing it in broad daylight, is that i love connecting with the people passing by or coming close to see what I’m painting. It makes me feel great seeing smiles on their faces. I believe, a walk through the center of Athens will convince everybody how open it is.

– Which artists from Athens you like or could point out?
I could say my favorite by far is Vasilis Markosian a.k.a. IMPE.

Dreyk the Pirate and Antios

– If you could explore and paint anywhere in the world, where would you go and why?
Every place in the world has its magic, but if i have to choose then it would be Asian countries.

– What do you do when you’re not painting?
I love drinking cold coffee with my girl, watching lots of movies indoors, listening music, and playing with my black cat.

8 more photos from Dreyk the Pirate in Athens and greek islands.

8 new photos from Dreyk the pirate in greek islands and Athens with Antios.