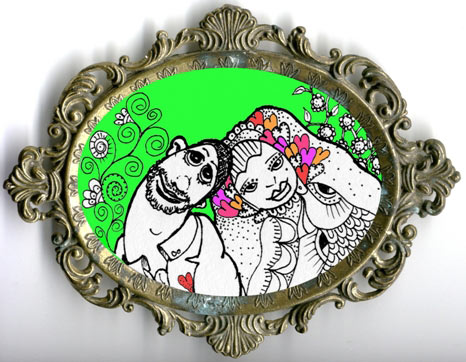 – This is a question we usually ask to rock bands, but where does your name (Zonenkinder)
come from ? and why have you made such a choice ?

“Zonenkinder” refers to the “twighlight zone” from where we get our inspiration
(or extraterrestrial orders)
…but  our crew-name originally derives from a funny street-project we started in 2001. in this project we used the typical “ZONE”street-signs which indicate pedestrian precincts. We used the pictograms on these signs and gave them – mostly by applying stickers to signs – faces of animals/famous persons like Marilyn Monroe, dalai lama etc./or just imaginative faces, let them wear shoes, let them carry strange mushroom-baskets etc.
The original meaning of the term “zonenkinder” refers to the German history – when Germany was divided. The young guys from the eastern part of germany who were born somewhere around the time when the system-change from communist/socialist to capitalist happened, are sometimes called “zonenkinder”. This expression derives from the word “zone” which was some kind of synonym for the German Democratic Republic and the word “kinder” (children). 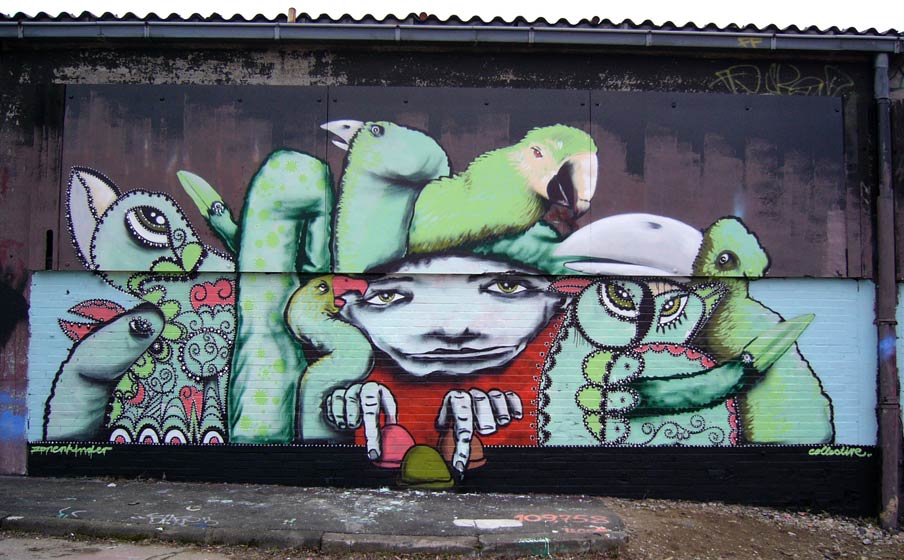 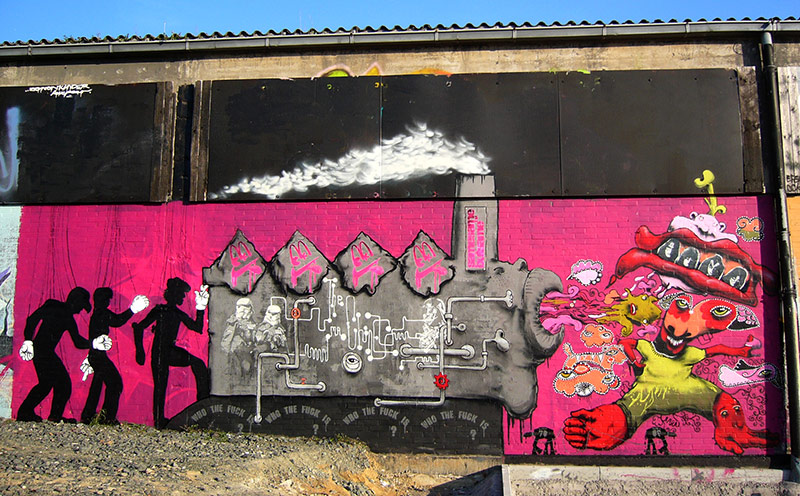 – Zonenkinder is a duo; you also are a young married couple. Do you sometimes feel the need
to paint alone ?

Yes, of course! Sometimes it is more a kind of “motivation-thing” and sometimes one of us likes to express/push an individual thing. From time to time we also have specific projects where the clients/collaboration partners are asking for the special style of one of us (e.g. the fashion-project from last year together with the Frankfurt based designer Lin Beeser).
… and we also have projects where one style works out better: the trees for example are more a kind of a solo-project concerning the painting itself – but discover the beautiful spot in the forests is something we do together. 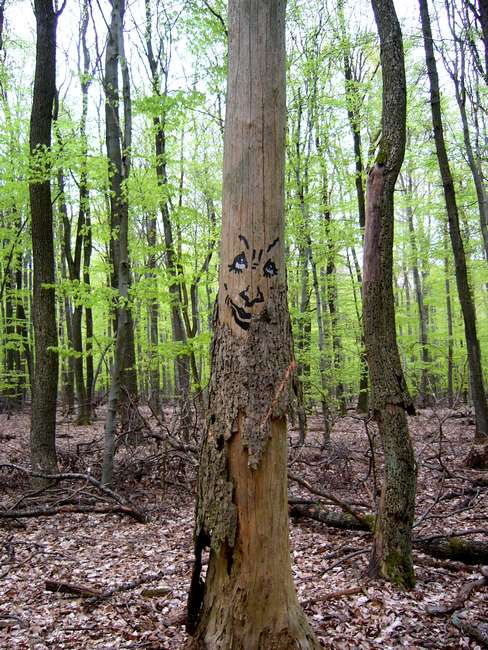 Was there anyone, or any particular moment or event that motivated you to begin painting
together ?

We founded the “Zonenkinder Collective” about 8 years ago as a cooperative project to create our own world of a(r)tmosphere, influenced by mixed memories resulting from our various journeys and from our love for art, for the flavour of graffiti and our positive thinking.
But there was not really a particular moment or event… of course we had some initial experiences concerning art-projects, murals and stuff but our interests in art and the passion for graffiti grew together somehow naturally.  Maybe working together became the logical way of being and living together.
As we both love spending time with each other being creative it proved to be the best to share our passion for art by working on the “zonenkinder”-project as one. a shared alter ego…additionally of course it is very inspiring to create a wall or something together
…together often we discover places which scream for color and revival or we suddenly see diffuse parts, faces, animals in a fresh painted wall and let it flow…we love to jam together by creating a new piece of art, just to pour our soul direct on the wall… 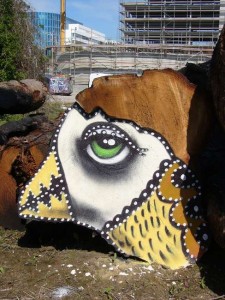 I’m particularly fond of your work with trees. Land art from the sixties has been partially criticized for not really respecting the environment. Is it something you have in mind
when you paint on a tree ?

One main part of our work is definitely to create art in the nature and to work with the environment which surrounds and inspires us. Do we have scruples? Yes and no. About two or three years ago when we started painting on trees we had some scruples doing this. So first we solely painted on dead or dying trees. And even today we mostly paint on that surface. But we are constantly in search of new spots for our art and new ways to be creative, and as we see imaginative faces etc. in the living nature around us as well we decided to integrate also living trees in our project. We are convinced that just applying some paint to a tree will not kill it (instead of acid rain or something). Furthermore we are deliberate to paint only a single or a few trees in a single forest – we do not want to destroy something, in a subjective sense we focus to be an active part of our environment with our works by transforming and re-interpreting what we find and create a new atmosphere. 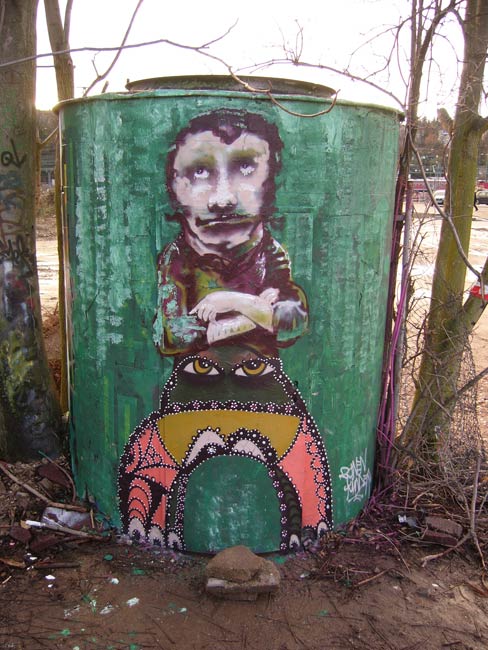 You visited several cities and countries in Europe last 2 years, what’s your favourite city
to paint ?

We really like Lisbon, Berlin and Sete (france) because of the “unclean” atmosphere in these
cities. But when it comes to painting, the painting-spot itself, the atmosphere and the connection between the artists working together on a wall or a project is the most important thing.
You can sometimes experience the best times in small towns or abandoned sites which do not
even have a name simply because “set and setting” are fantastic. We think no big city or
“must-be-place” is needed to have a great time outside painting. 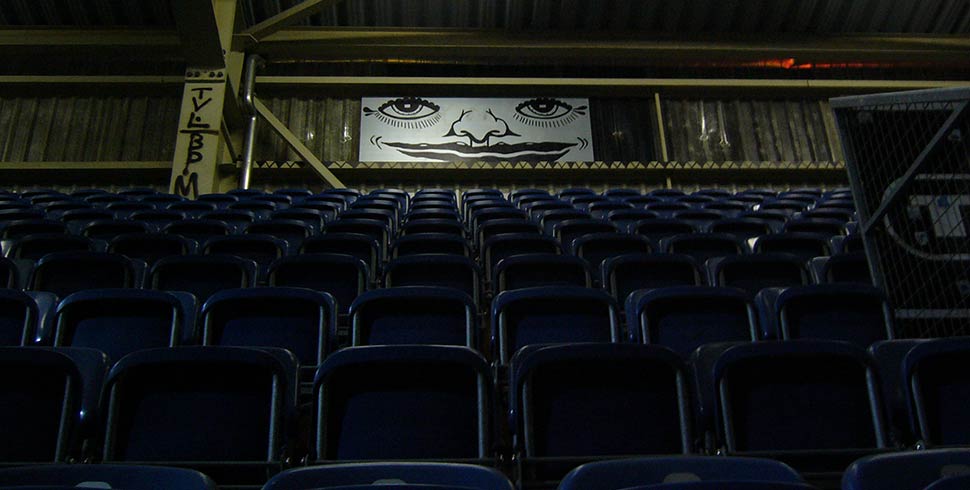 You painted in an abandoned stadium in Zurich, can you tell us a bit more about this place ?

That was a real strange story and a funny place to paint as well.
We and some other artists from Belgium, Italy and Germany were invited to come to Zurich by a local artist whose name we do not want to tell – you know who you are 😉
From the beginning on it was some kind of conspiracional event. Neither we knew what kind
of site the festival was going to take place nor where the event was at all or who would be there. So everything was some kind of surprise when we arrived at the meeting point, a
squat in Zurich. The squatting guys were extremely suspicious of us (maybe because our clothing were not all in black and we were not masked.
Not until ten minutes before the guys from the squat left to head for the event the guys at the squat told us where everything would happen: the former grasshopper-stadium.
The opening of the event started with a rude police-action. The police of course wanted to prevent the people from squatting the abandoned stadium and shot with rubber-ammunition from a short distance into the crowd!
But fortunately they were not able to clear the stadium and pulled back. So the stadium got slowly but surely transformed in some kind of a creative festival site. The activists started immediately to go over the advertisements, to build stands, bars, a kitchen and different tents directly on the playing field. Additionally there was a stage in the centre for music and bands. They also organized different happenings like a race with selfmade cars or a kind of cable railway from one roof of the stadium to the other all over the playing field. While there was a lot of action in every corner of the crowded stadium they invited painters and lots of local troublemakers “visually reinterpreted” the stadium.
In the end the whole stadium was painted – inside and outside. 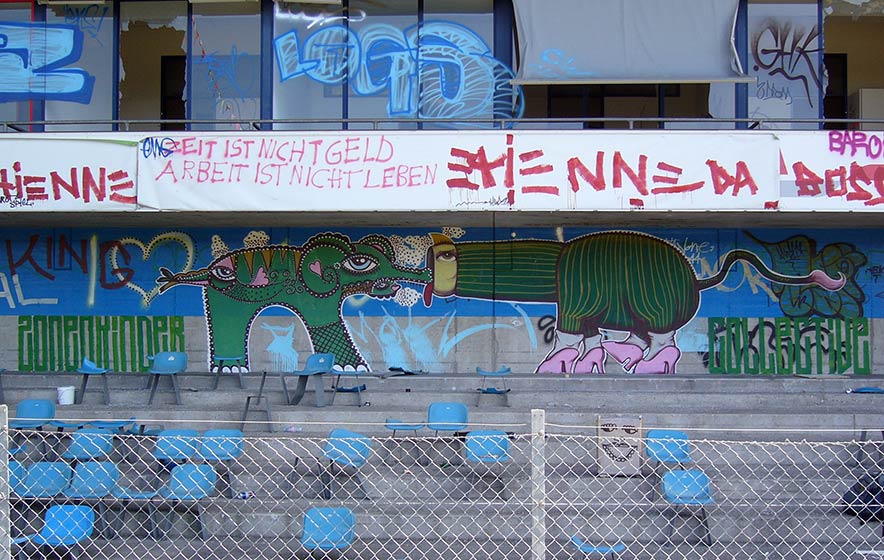 It sounds like a fantastic experience.
What other  artists do you most admire and why?

– Kowalski from Berlin, cause his characters are full of so much soul and energy. His style integrates typography, painting and characterdesign and is really worth checking out.
– Alex from Wiesbaden, cause his rude graffitistyles are simply burner.
– Esmaeil Bahrani, cause he showed in his art that there is so much more to learn about
expressionism and action-painting – spheres of art which are underestimated and
underrepresented in the “urban art scene”. Beside of that he is a great impressive guy.
– Herve Di Rosa who is a great painter of figuration nouveau.
– Os Gemeos, JR, Latlas, Blu with their inspiring works.  In this all day moving picture-carousel they are still able to make us being amazed and surprised! 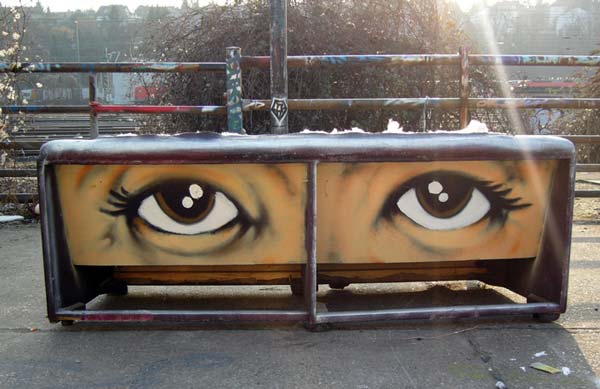 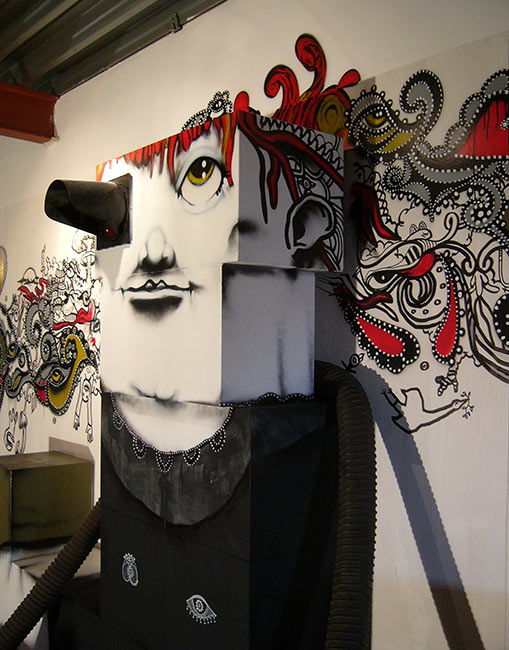 If you could do artwork for the CD  of a musical artist, who would you like to work with
if you could choose anyone?

– We think our artworx would  go with many different kinds of music, ranging from psychedelic rock to rap. Let us see what future brings 😉
But if we could choose right now: lee “scratch” perry. He is a weird and strange genius. 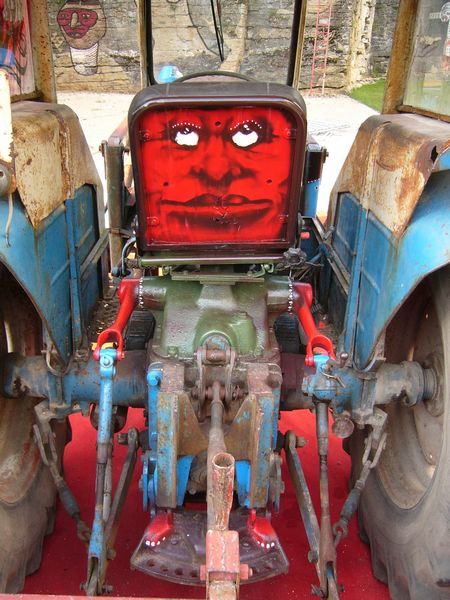 – Yeah, there is more to come in the future and we got several upcoming projects. Here
are some parts we would like to emphasize:
We are looking forward to our show at the Basementizid-gallery in Heilbronn, Germany
together with mr. Kowalski.
Furthermore we plan to travel next spring to Iran to meet friends and artists there –
and paint for sure.
in summer 09 there will also doing a show at a festival in Sete and we will be in London,
ah, and check also: the upcoming issue of ROJO-magazine (out september 08) with some Zonenkinder artworx – and also great other contemporary artists of course!

Curious to see what we are talking about? Visit our website:
www.zonenkindercollective.de.vu

This entry was posted in interview and tagged interview, zonenkinder. Bookmark the permalink.