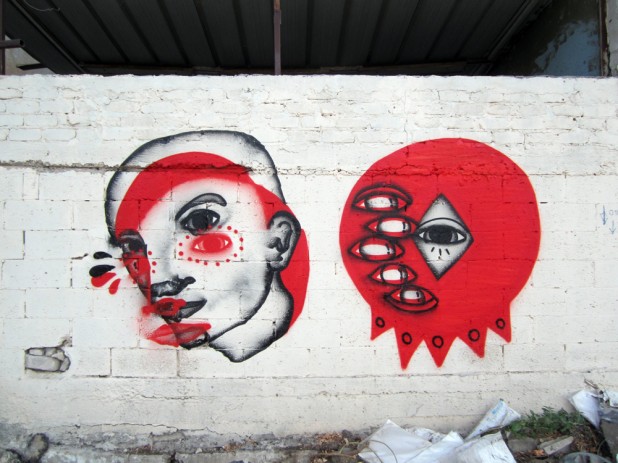 Can you introduce yourself ? Who are you ? where do you live ?
Over the last 7 years or so I’ve been signing some of my works as Klone , some I don’t sign and others are done under different names . I guess my most known work goes under the label of Klone so we can stick to that.

I come from Tel-Aviv ,
which is physically located in Israel ,
but mostly feels like an independent island
of sanity/insanity in this crazy land .

My beginning with street art lay in graffiti which I started doing somewhere in 1999 (under the name MAKE), back then we didn’t really have any graff scene here in Tel-Aviv or in Israel at all and you could count all graffiti kids around the country on one and half hands :) 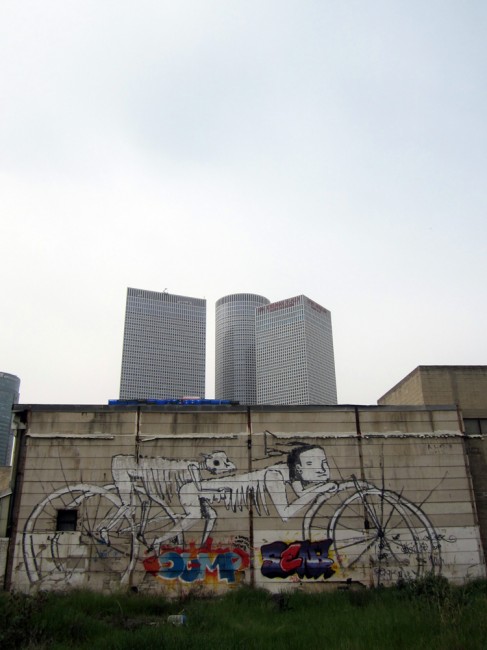 How did you came to street-art ?
Long story short – around 2003-4 I started to experiment with characters . Started with stickers and passing through couple characters I came upon one that eventually got me my current name and stuck for awhile, It was a kind of clone but I wanted it different so C was replaced with K . Years later I’m not doing a single character anymore and half the time I don’t even sign my work outside but trying to develop a kind of deeper conversation between myself, the city and the occasional viewer. And since few years ago I started to be more involved in the contemporary art scene in Israel, then the environment of the white cube came into my life and allowed me another platform of self expression. 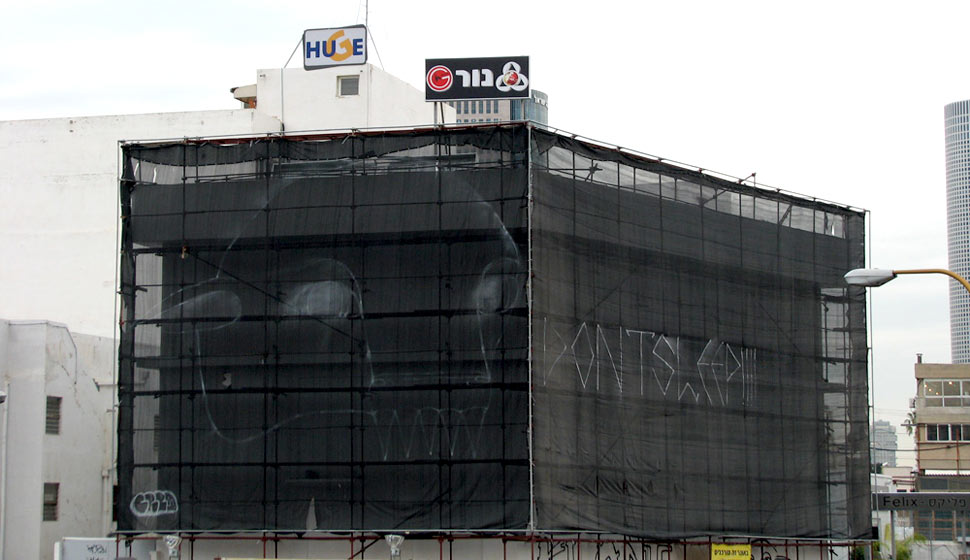 You are born in Ukraine. Are Ukrainian culture and graffiti scene an influence to your visual language ?
I moved from Ukraine to Israel in 94 , back then there was no graff scene in either of the places . I am surely inspired from the Ukrainian folk culture as this where I’m coming from . I always feel that I didn’t get enough of that and trying to learn more . I think that eventually the work doesn’t reflect one place that I belong to because I can’t say I belong to one place or culture, so the work is neither Ukrainian, Israeli or International. Its more of a hybrid, evolution of thinking that becomes through adaptation to new environments around me. 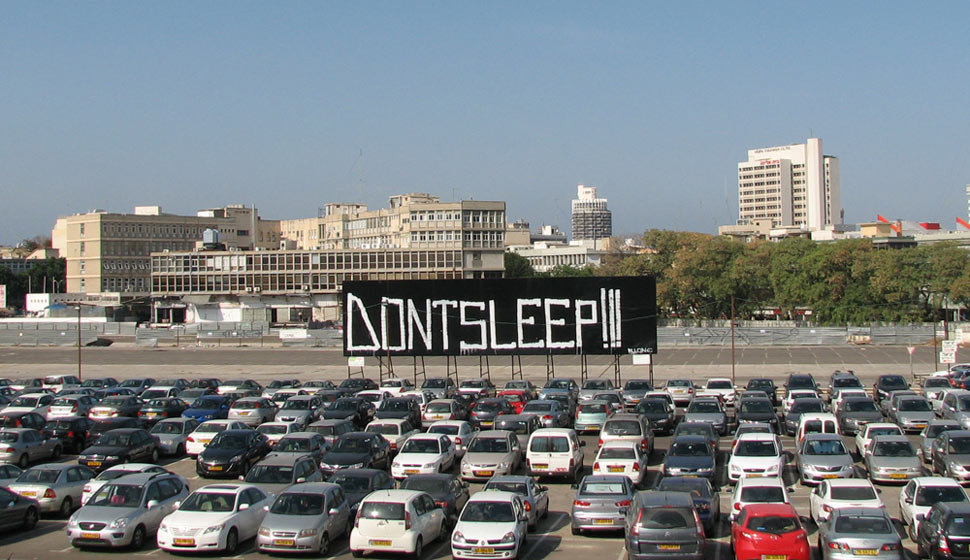 Who and what inspires you ?
I think what inspires me the most is the constant changes around us. Of course I’m always looking back , at history of humankind , art history and my own roots , but those things are always in the back of head and they’re more like a library you to for reference . The everyday life , the news , the people , the city , all those things that change with me or without me are the ones that fascinate me the most . I think that’s one of the reasons I have this feeling and hope that I wont ever be able to accomplish myself as an artist , there’s way too many things I want to paint , sculpt and create in many other ways . 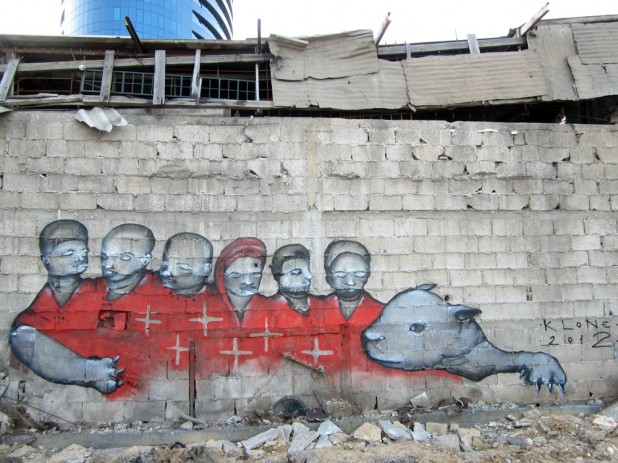 What do your work express about yourself ?
My work is probably the best way to see who I am and how I reflect my surroundings , as I’m not so good with words most of the time , I prefer to communicate with images, and only through viewing a large amount of my work you can understand something . 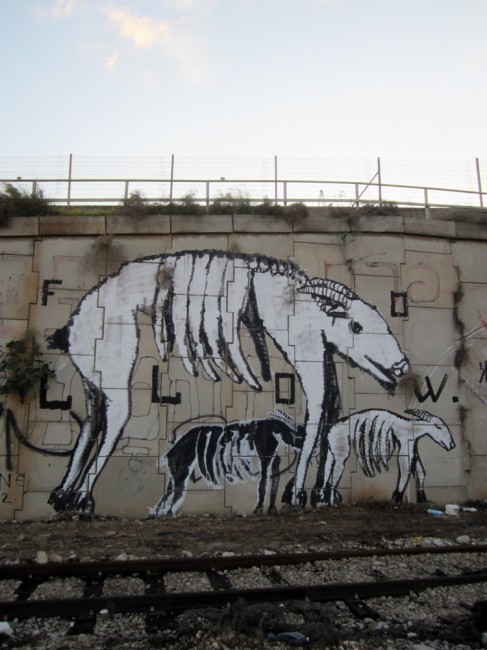 You released your first artist book with a lot of your photos and illustrations. Is it a self-published book?
Yes, Its self published , probably because

I always thought that the DIY way is the best way

and it assembled from 160 pages of images only in a hardcover . This book was a way for me to get away from all the big projects I’ve been involved with over the last year, like solo show and group show in Tel-Aviv museum, and focus on something more private . In a way this book is an attempt to bring you behind the scenes of  my work , get into my head , with all the weirdness that comes along . It assembles bits of work from past years and also work that was done especially for it. 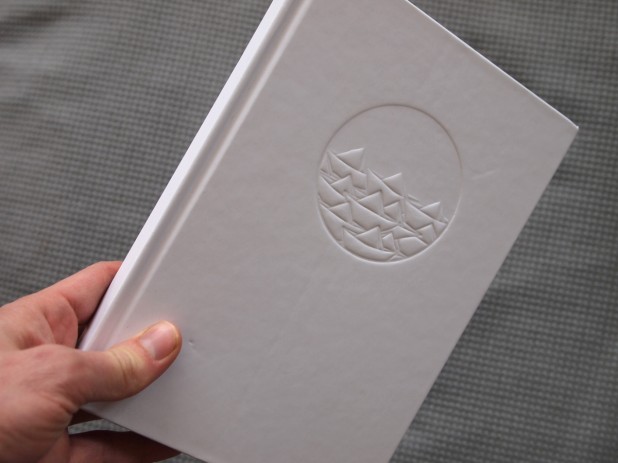 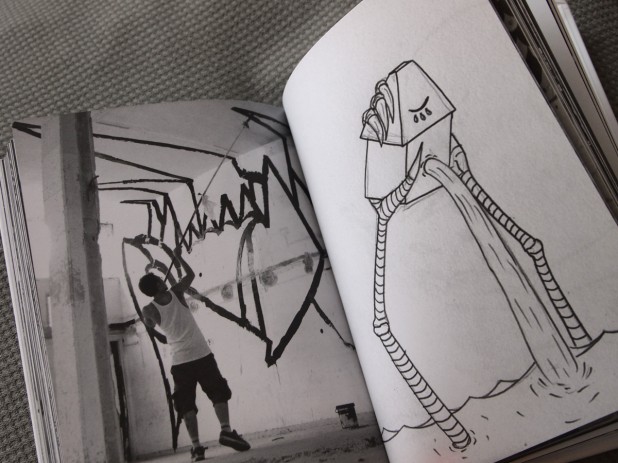 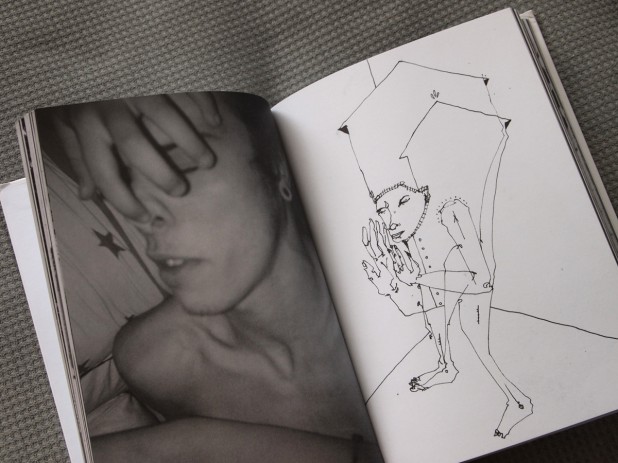 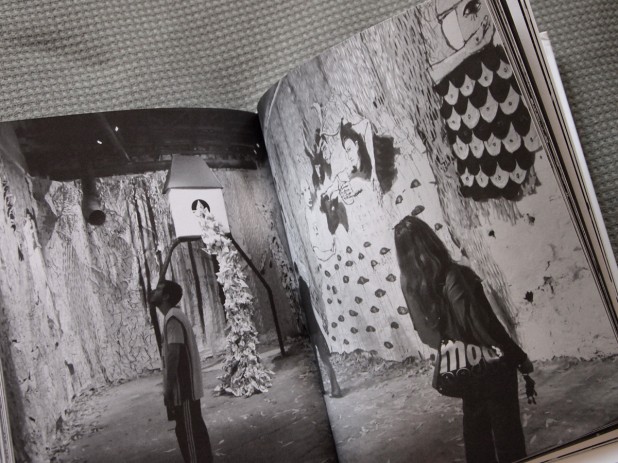 Is it still possible to found copies?
You can still get it at http://kloneyourself.bigcartel.com/ . 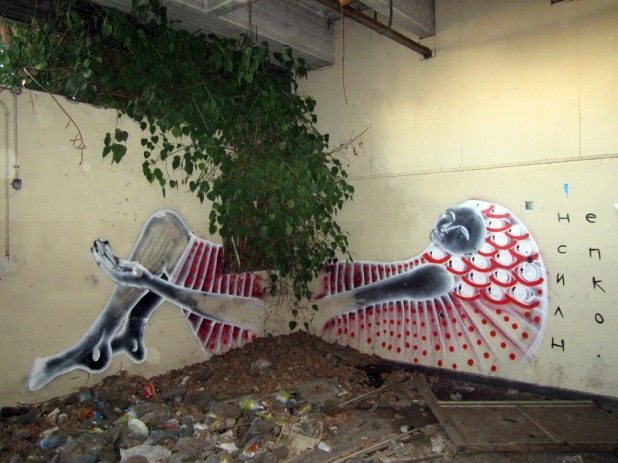 Is there an active graffiti & street-art scene in Israel? Are Tel Aviv and Israel good places to paint ?
Israeli graffiti scene definitely grew since the days I started , in the last 4-5 years there was kind of awakening for it , and now it feels as if it was always here . Its still kind of small , but small and kicking . Tel-Aviv is a great city to paint , both because of good weather 90 percent of the year and also because this city doesn’t really know how to digest graffiti/street art yet . Of course you need to be careful of cops and over-concerned citizens , but on the other hand , it all depends how , where and when you do it , and its quite easy to get away with painting good spots . Plus , its a constantly changing city , and after years of painting I still keep finding new spots and ways to paint without going over anything old and thats something you won’t see a lot . About Israel the country, the painting is a bit different from city to city , and of course its always easier to paint any city if you’re a “tourist” there . 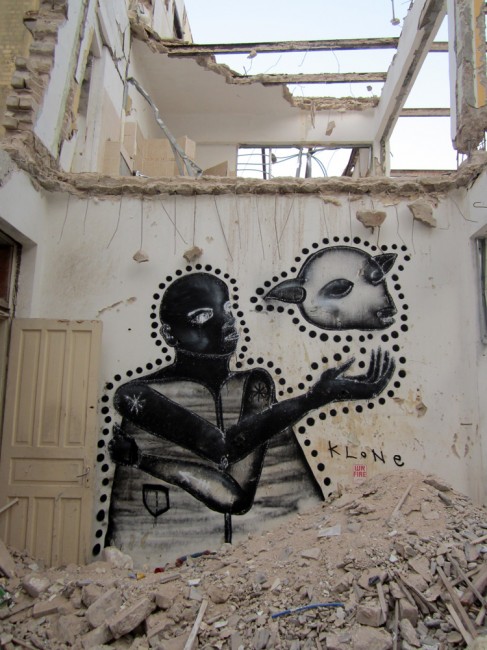 Which artists from Tel Aviv should i know ?

There’s few people in Tel-Aviv that I can point out for originality and staying true to their work , some paint less and some more , those are some names of people that caught my eye and mind in the past years and I believe will keep developing in one way or another – Robat , Foma , Zerocents , the 035 crew (Korse , Cros , Jake and Remo) , Know Hope and Natalie Mendel . 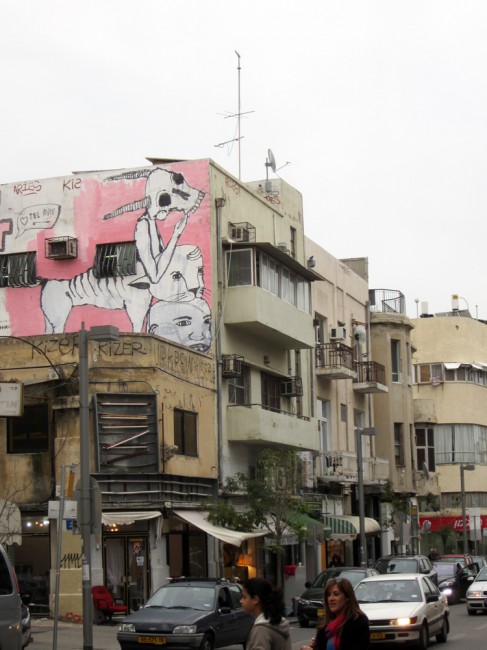 If I visited Tel Aviv, which are the places I shouldn’t miss ?
The beach for sun and sand, Jaffa for the best Hummus, Capzoola shop for the spraypaint and chill , and South Tel-Aviv for painting .
Anyone who’s coming to Tel-Aviv is welcome to give me a shout and I will always try to help in some way. 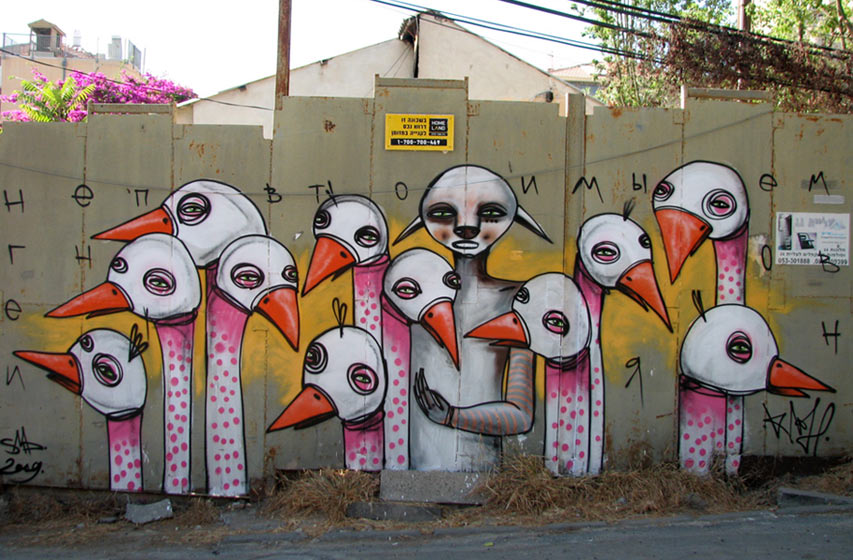 Can you introduce yourself ? Where do you come from? I come from the Czech Republic but I currently live in Indonesia. Yogyakarta is the City where I study indonesian…

Won ABC has just released Zombie Love a new book published by Publikat. I took advantage of the book to ask to Won -a true european graffiti pioneer and zombie…

Interview in French of Tacos, Mouse from Bulgaria and myself at Noshimag. Podcasts in Spanish with Nuria Mora, Ampparito and a few more at vdevictoria.