In 2007 i tried to make a magazine about painters on trains. I came in contact with active painters of totally different styles. Because i was never able to print this magazine, I want to publish two interviews. ( It’s never to late. )

HONET is one of my favorite train painters from France. His stuff never looked like typical “Hip Hop Style”.

In my eyes he was one of the few who started to “give a fuck” on the “Hip Hop Realness Attitude”. His stuff is much influenced by his punk and oi roots, later on by “urban dandyism” as he says. He is one of the few how is able to switch between art world and yard activity.
It’s always nice to see some fresh panels of him.
There are just a few trainpainters who are as long active as he.

Shl: Hello Honet, Please give a short introduction. And why did you choose the name HONET?

HNT: When I started it was fashionable to have a name with american words and connected with violent meanings like “crime time” or “bad boys”. Honet is more…”funny”and “cynical” in some ways! 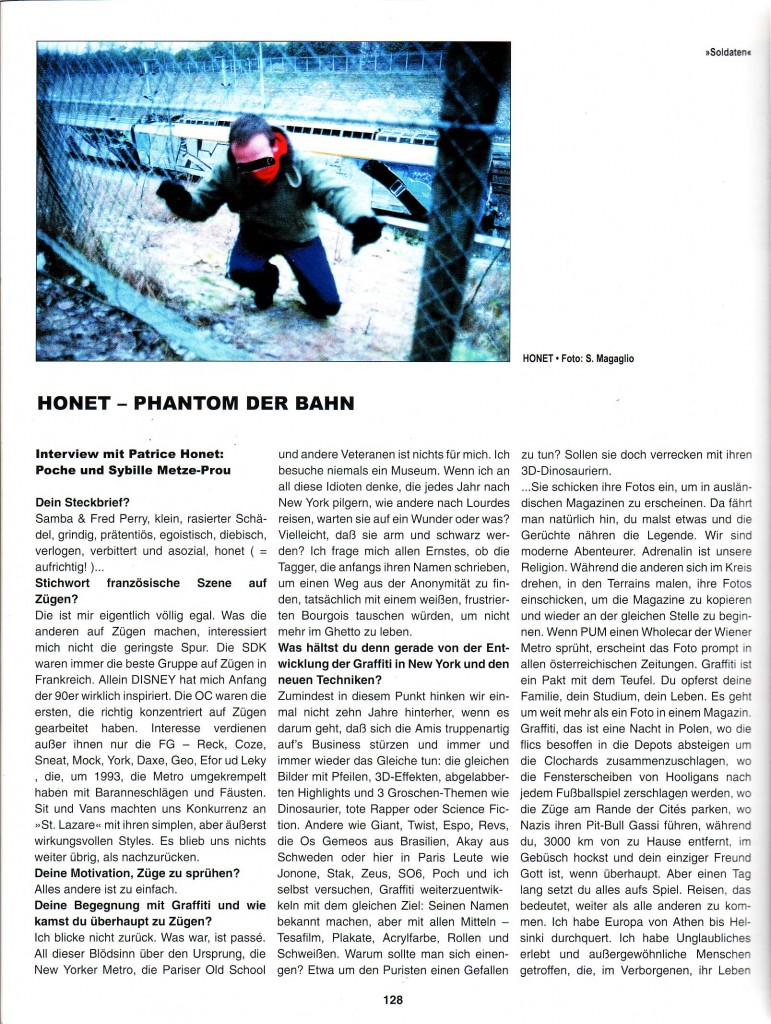 Shl: I remember an interview where you explained yourself in the following words: “Samba&Fred Perry,
small,bald head, egoistic ,thievisch, lying, bitter
and antisocial , honet ( = honest)” ( published in
„Graffiti in Paris“ by Sybille Metzte-Prou
,2001, Schwarzkopf&Schwarzkopf ) Is this still your definition? If something changed–why ?

HNT: Are they the exacts words??? (anyway,I think I never read this book!)…so if I have to describe myself actually, should be something like: “Prada, Samba & Fred Perry, graffiti-adventurer & urban-dandy…with only one goal: to laught about life !”

Shl: I’m especially interested in your trainworks. When did you paint your first train? Do you have some special memories?

HNT: Sure! The really first time, some famous graffiti-writers from this time (early 90’s ) invited me to join them. We went by car outside Paris and did some cool damages on 2 silver-with-red-doors commuter trains. Colorz, Oeno, Veas and myself under the name of “Poe”. Then I decided to do it again by myself. With some friends, Natyo and Earl, we discovered a metro yard and found the way to go in. We came back one week after and I did a top-to-bottom and a panel before getting chased by a guard, but what-a-souvenir !!! 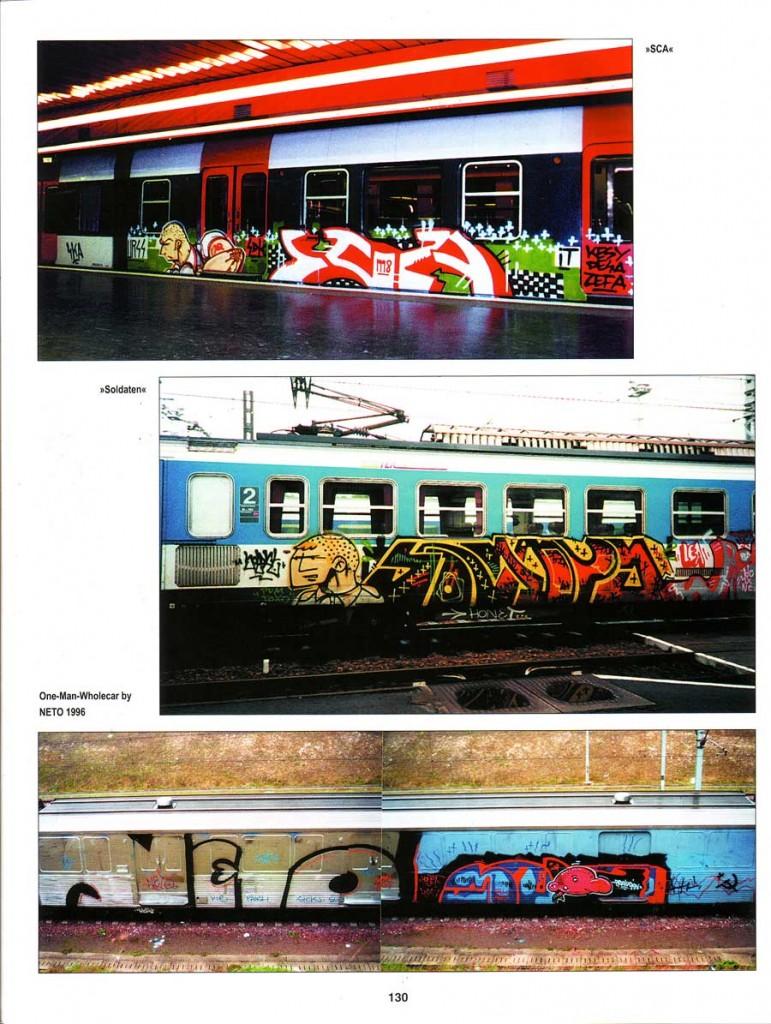 Shl: The book „Graffiti in Paris“ shows panels consisting of a character and a style. When did you start with that kind of characters? What was your idea behind that works, cause most of the characters showed skinheads?

HNT: Before being a graffiti-writer I was listening to punk-rock music, especially a cult French punk group called “Berurier Noir”. They were not only good as “musicians” but they had a “strong image” and an “attitude” (I was a great fan of Public Enemy at the same time, who had a strong aesthetic, too). Then I met two guys, Shun and Poch. We started to paint a lot together on trains and they were both totally into punk,oi music and skinhead culture. Step by step I discovered that Graffiti is not necessary connected with hip-hop: I’ve met lots of Writers, especially from Spain, who were into the same mind as us. Listening to Ska and wearing Fred Perry !
I’m not ONLY listening to punk music, I’m even more into electro or new-wave but I really like the Skinhead and Mod cultures. Ghetto dandies/ rude boys: that’s, for me, the perfect reflection of my life and the way I do graffiti. Then I used those Skinheads characters as a way to say: ” I don’t care about your rules, I’m walking my own way. I’m free and I’m waiting for you to follow me !” 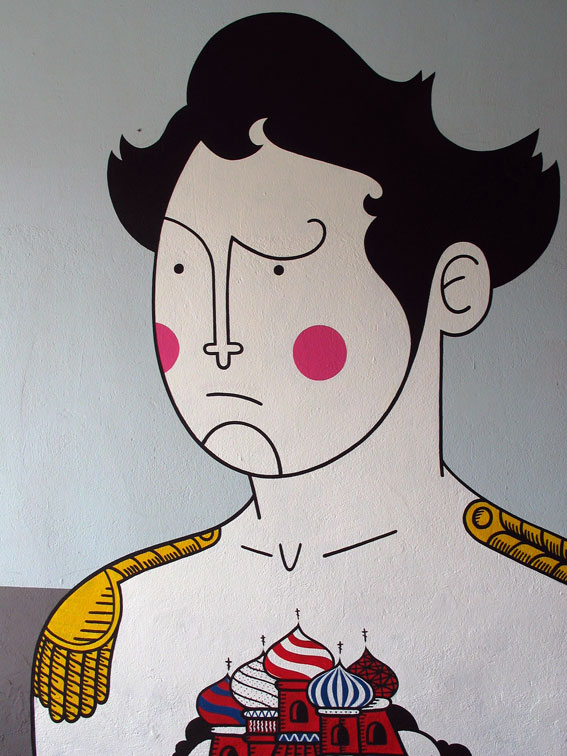 Shl: Around 2000 i saw more and more of your works ,
especially the characters, in the streets. Why did you
change to paint more in the city?

HNT: Painting trains just became, not “boring”, but it was about “going nowhere” : one more train, one more picture, in a middle of tons of other train pieces from arrogant new-comers ( who probably dissapeared since that, crash down by some others ! ). I needed to grow up, to find a new way to rise in the middle of this crowd. I didn’t change, I just decided to explore new areas and use my trainpainter energy for new challenges but I’m still talking about the same thing: “GRAFFITI” and the faces that I’m painting are the symbol of it: hard attitude / a bit of romantism, minimal technic for a strong impact.

HNT: Yes I still paint trains from time to time because I like it and I like to share those magical moments with my friends ( who are all train-painters ! ) but I’m trying to be more “relax” about it and fight against this obsession and my paranoïa. I’m more actually into searching for new metro-systems that I never painted before and where nobody, or just some jet-seters, went before me ! 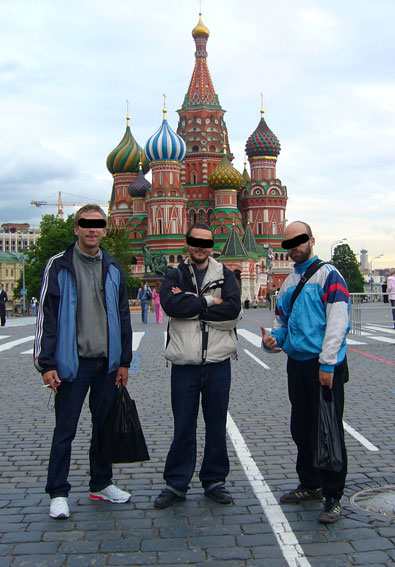 Shl: On your website , everybody can find something about your travels around the world. It seems that you are one of the oldest, still active interrailers .When
did you paint the first train out of France? And When was the first interrail tour? What has changed since your first interrail experiences? Do you enter international yards alone or with local painters?

HNT: We started in 93, first we went by car, Shun, Poch and myself to Belgium, Holland and Spain in the beginning of summer. Then we did an interail in september, we visited Stockholm, Helsinki, Copenhagen, Berlin and Munich. I’m still in contact with some crazy guys that I’ve met at this period like the MSN, VIM, FTC or the CDC and I’m still meeting them across Europe from time to time. Some I’ve met only few days, few hours in the night, but I will never forget them and we are all something like “forever friends”. Even if I see them only once in 10 years !
That’s also the reason why I’m trying, as much as possible, to paint with the locals. I don’t care about giving an “hardcore image” painting alone, I like to communicate and exchange experiences with people…of course sometimes they are just “unprofessional annoying young kids” but most of the time we have really good feelings and lots of fun together ! I don’t care about a nice panel with a good picture in an easy yard…I prefer a good action with cool partners in a risky hangar, even if we don’t paint at least !! that’s the most interesting part of this graffiti life, as I said before: sharing magicals moments !! 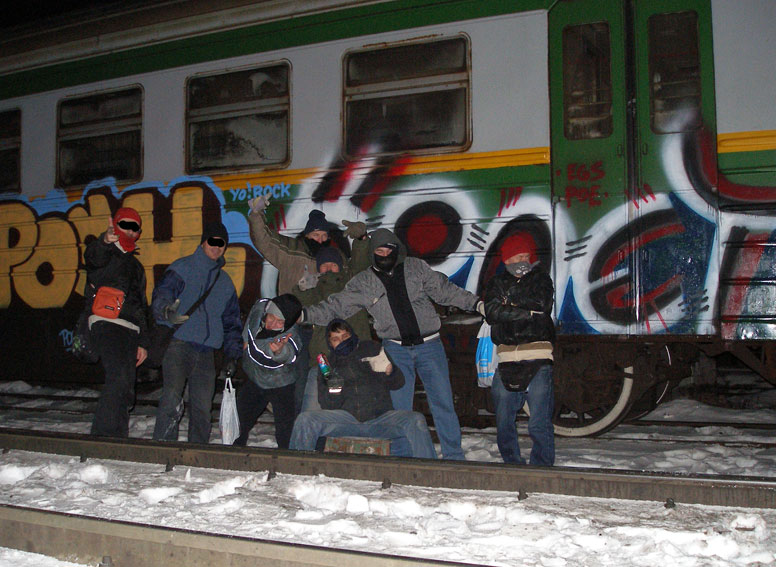 Shl: What do you think about the development that more and more west european painters go in the eastern parts of europe and rock their systems?

HNT: Of course, interailling is now a heavy industry : every writer is travelling and I like it, especially for the eastern ones, that’s a great oppotunity for them to discover the world. I like to watch how it turns into a big and massive mess for destruction ! I hope that soon some new waves will come from China, Mexico or Irak ?!
And : “hahaha”…I don’t beleive that the western painters are rocking the wild-east, maybe just a few like some guys from Berlin but the others just focus on easy targets like Bucharest subway. Instead I can see lots of east-writers, from Poland, Slovakia, Czech Republic, Hungaria , crews like EWC, RCLS or GLK and now from Russia. They do big dammages when they are coming around. They have no fears and just laugh about our “human-rights” countries ! 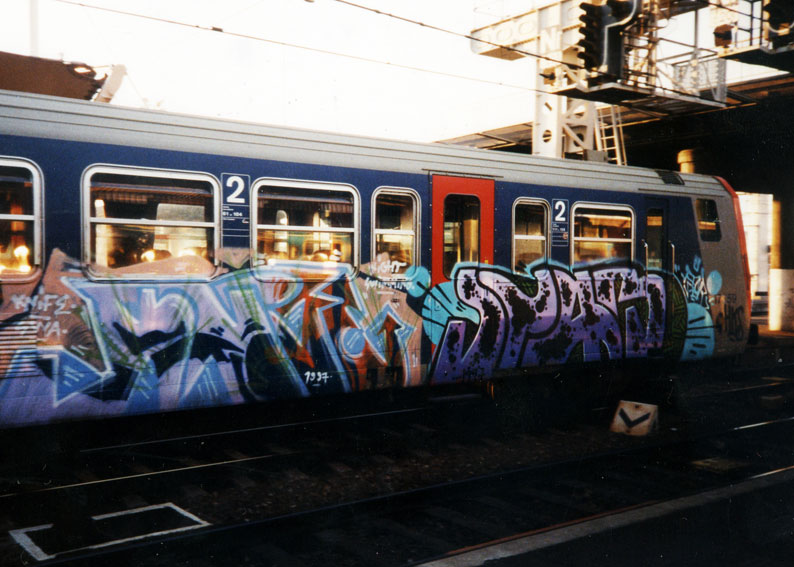 Shl: Do you still do trains in france, especially in paris? Did the development of the fast buff change a lot in your opinion about trainpainting?

HNT: I stoped painting trains in France in 2003…not because of the buff ( because sometimes french trains can run for a long time ) and I told you, I like the action more than the result. But I was tired to ONLY think about trains 24/7 and tired to became more and more paranoiac. Waking up every monday morning at 05:00 AM waiting for a cops house search ! That took to me too much time and energy. Now I need to enjoy life, spend good times with my friends and some time for working on all my differents projects !

Shl: ok that’s all – right know it s your turn – what else you would like to say …

HNT: Everyday I’m thinking about my friends, from Liege, Stockholm, Berlin or even Russia, about my partners, the SDKWUFCs, VAD, TMA, P2B and WMD, about all we have done together and all the things we’ll do in the future and it makes me so happy, it makes me mad every minute of my life…Graffiti is the strongest Art movement in the History and I’m so proud to be just a brick in the temple ! 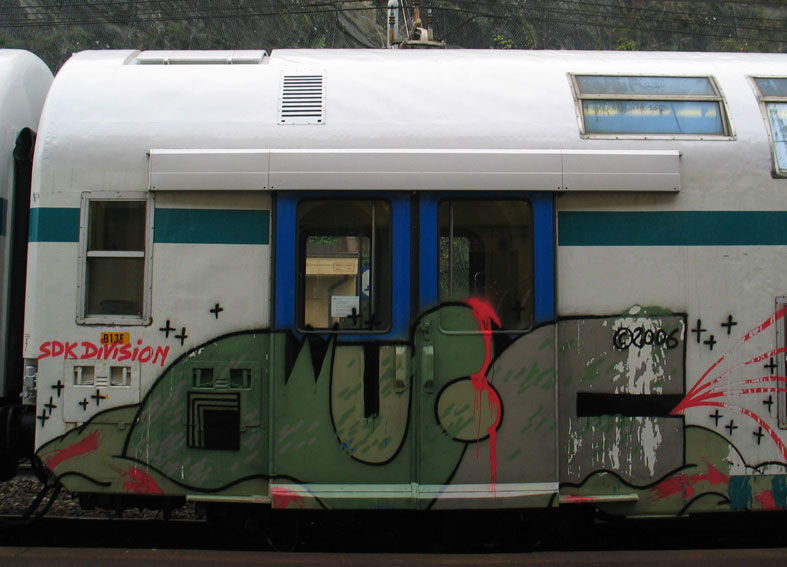 I took the opportunity of SANER book release to ask him a few questions. All the illustrations come from the Saner book printed by Belio for their Die Young collection….