Last weeks I exchanged a few e-mails with BR1, sharing some thoughts  about his work.
Here is some interesting extracts from his e-mails for you to understand his motivations.
eko 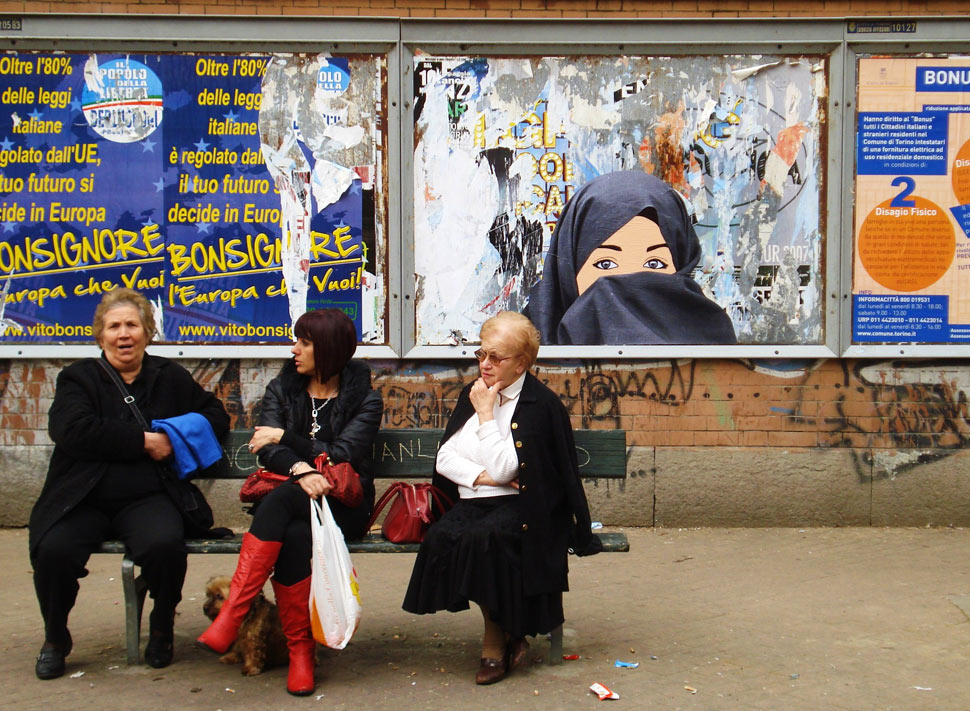 BR1: I am working and studying on the figure of the Muslim woman since two year: history, tradition, legal sources and development in contemporary society. A complete research on the theme.
In Turin when people ask me why I draw this type of subject I tell them that it isn’t a case, but I study the theme. 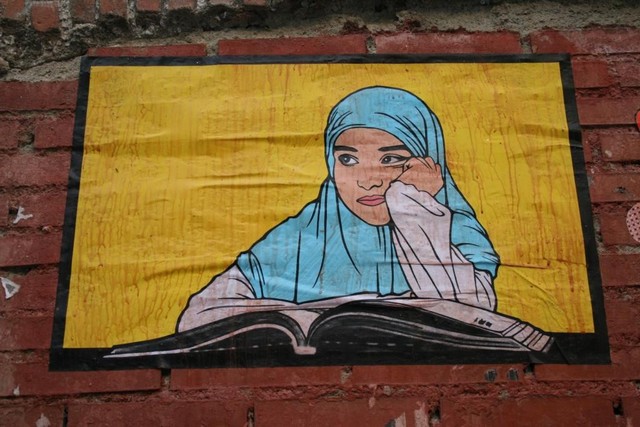 As a lot of artists, I started my career interpreting typical subject of our world: USA power, corporation as mcDonalds, the clash with eastern world, pollution. I was looking for images on magazines to take inspiration or making some collages, and my attention fell always on images with a woman wearing the veil. For me it is charm. A woman wearing it has another allure or behaviour. And you know, for many people the veil is a sort of taboo or a cryptic theme, but it captured my attention, because I am a curious person. 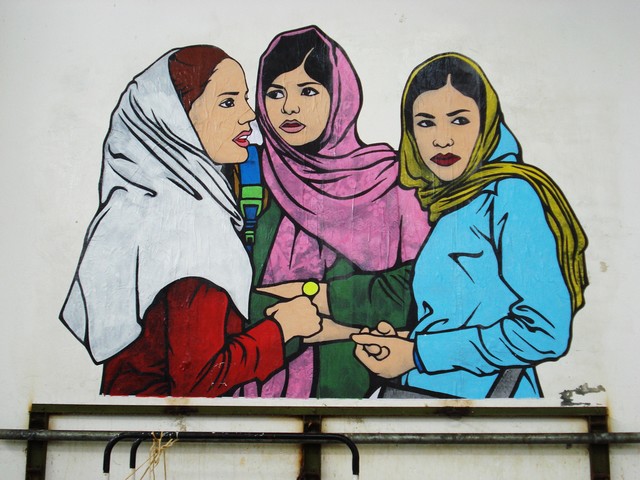 Some years ago I understood that I don’t like to express my creativity  on topics like USA, oil, wars, poverty in Africa, even if they are themes that I follow and I read books about them. Since I start drawing, when I was young, I made draw of  human beings. I love figurative drawings. But I feel that I was not interested on the western woman, because I want to try to use art to describe a typical phenomenon or a sociological theme, as David Gouny make with the figure of fat women in his posters or FKDL with woman silhouettes, you know?!
So, drawing Muslim women has been a process. 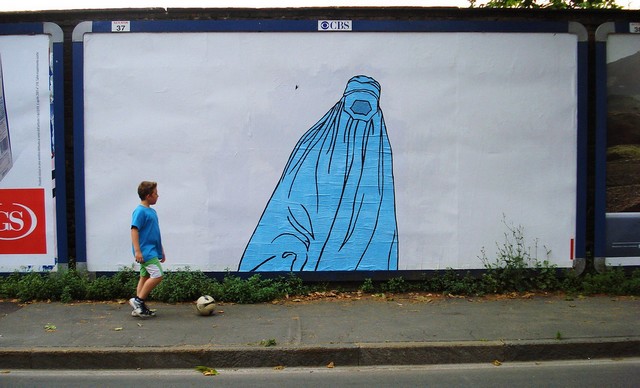 But I am from Italy; I am secularized and I have a big respect for other people in general. I think that today is a risk to introduce religious elements on my poster, because I don’t completely know Islam, I am not Islamic, and I am not interested in religious. This is the point: why a dress has so strong connotation of religion? This thing attracts me. 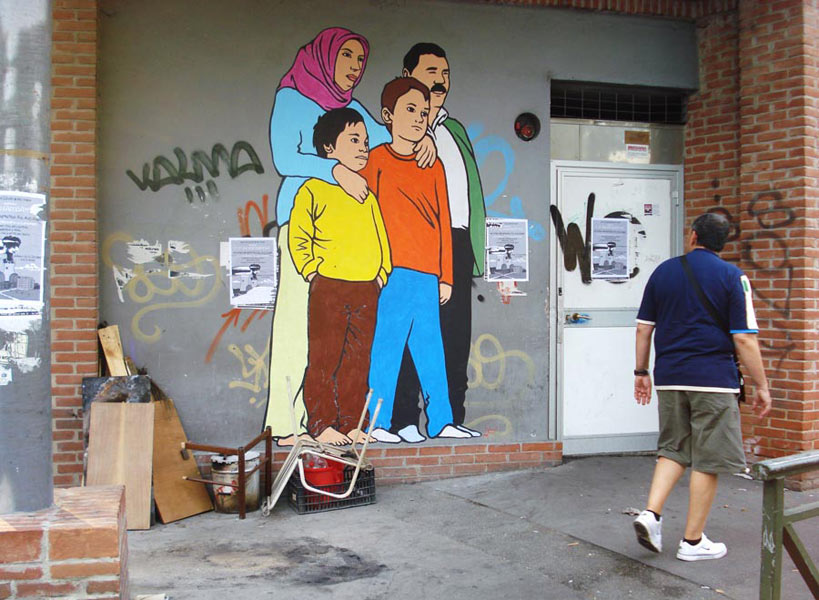 Today, in Paris, Tehran or Tunisia, in 2009, women don’t think that the veil is only a religious symbol. The society is more developed and the media or globalization change lifestyle of all the people. There is something else behind the veil (and I try to make some hypothesis). Moreover, I am Italian, I don’t want to pass as an Islamic artist (but I love to make some collaboration with them). Veiled women live with us, they are in public spaces with us, and new generations are Italian, French or Australian. So why I can’t retract them. I love the woman in general. I don’t like to draw the man. This is a project based on the woman. and many girls, also Muslim, tell me that it is also a sort of feminism, because I give to Muslim woman a representation on city walls. 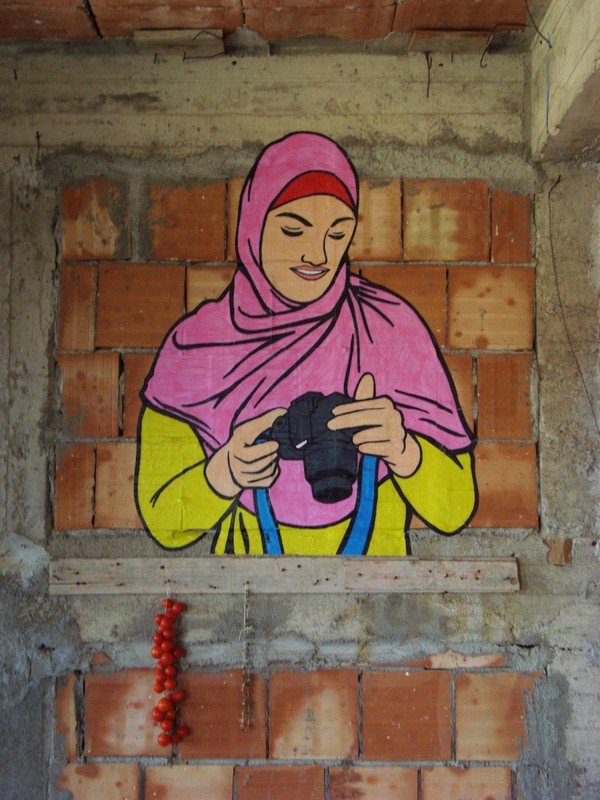 I often ask to myself:  Why aren’t Muslim women represented in the public space? An art critic here in Turin told me that if I go to Morocco or in Iran and I paste up my posters people wouldn’t notice them. Instead, if I paste up a blonde western girl everybody would turn heads to look at the poster. I don’t know if he has right or not. I don’t share his opinion.

I told you that I am Italian twice. A critic that Muslims make me is that I can’t understand Muslim women. It is a bigot critic to me. A woman is a woman from South America to China. Cultures and religions influence life and traditions, of course. but if really I can’t understand them I want at least to prove that western and Islamic women are mother at the same time, make sex at the same time, love French fashion at the same time, love pizza at the same time, take photos at the same time.
I have two modus operandi on my poster: in one hand I love to show the different styles of veil in the world. If you think, how many people in France have really seen a typical Afghani burqa? I want to show them. In the other hand I love to make posters with Muslim women that make typical things with passion and naturalness as western women.
If you look at my first posters you can find an Iranian girl playing golf. Two years ago I don’t think that a Muslim woman can play golf. But it is so strange? or many western people think that Muslim women can’t take a car license or smoking. It’s a wrong idea that we have of an different culture. 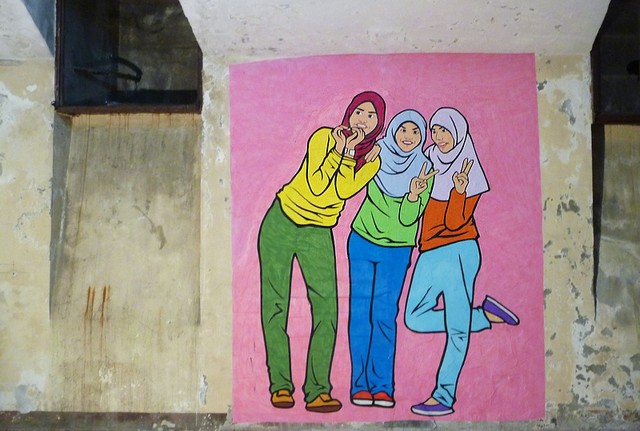 And with my poster, with humility and respect toward everyone I want to show this thing. I can deal on my theme in two manners: a religious and political one, and another one simpler: a cultural one. I choose the second one.

Another trait of my work is the colour: I want that my posters appear with nice and saturated colours, because I want to transmit happiness and positive feelings. 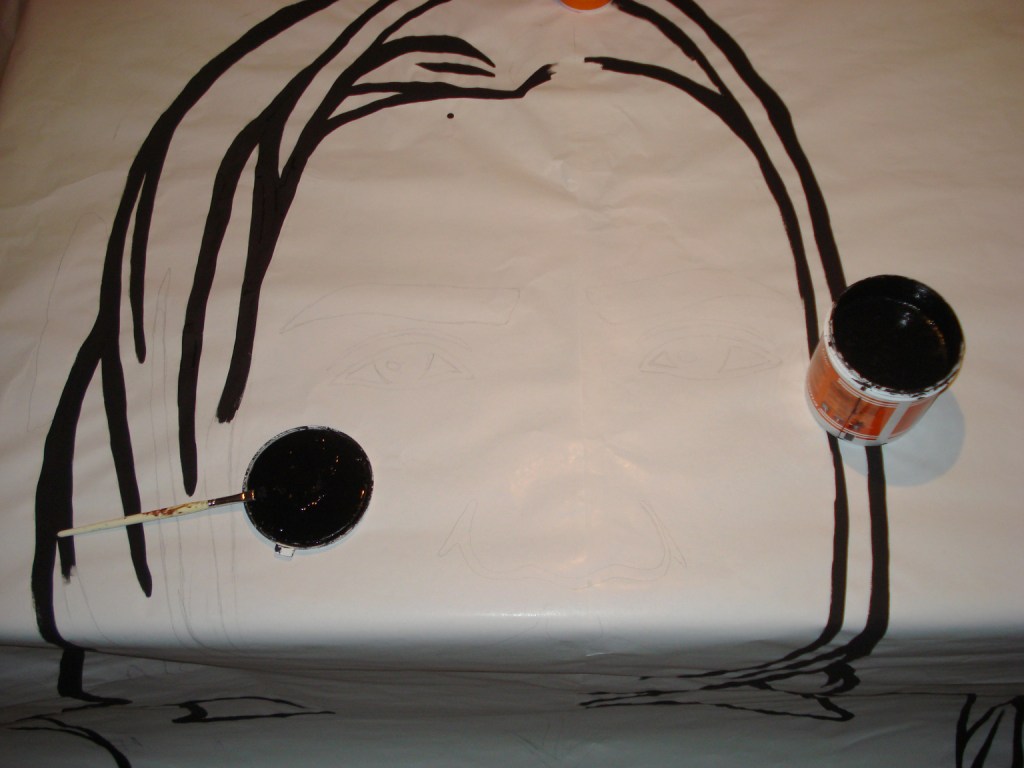 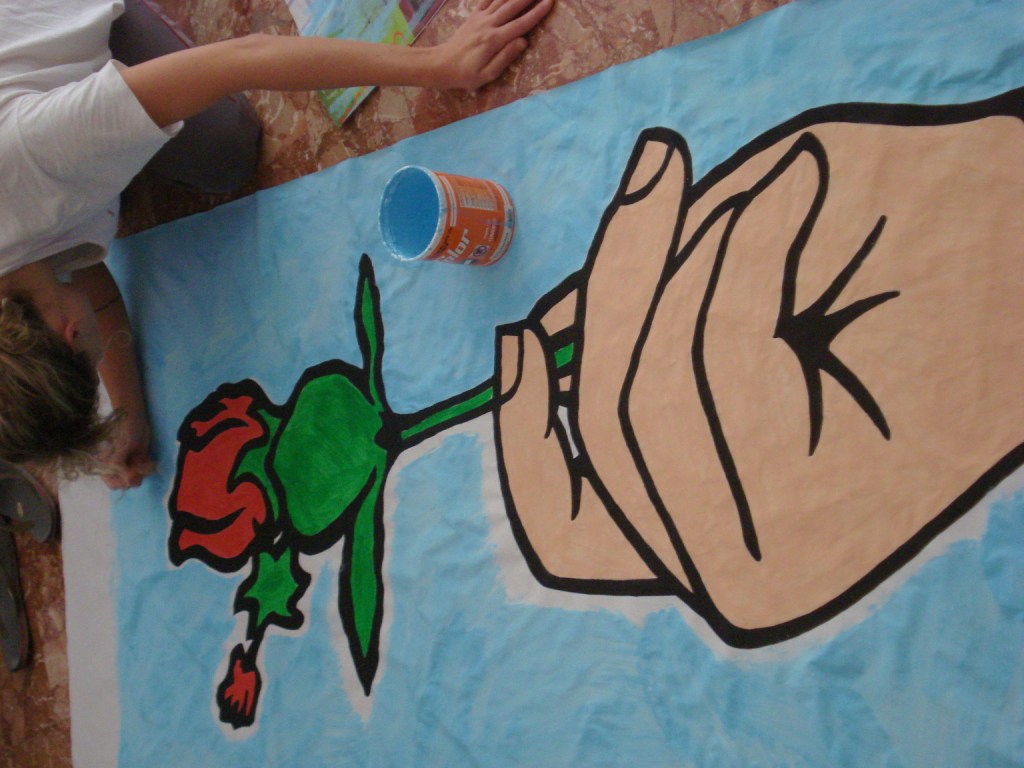 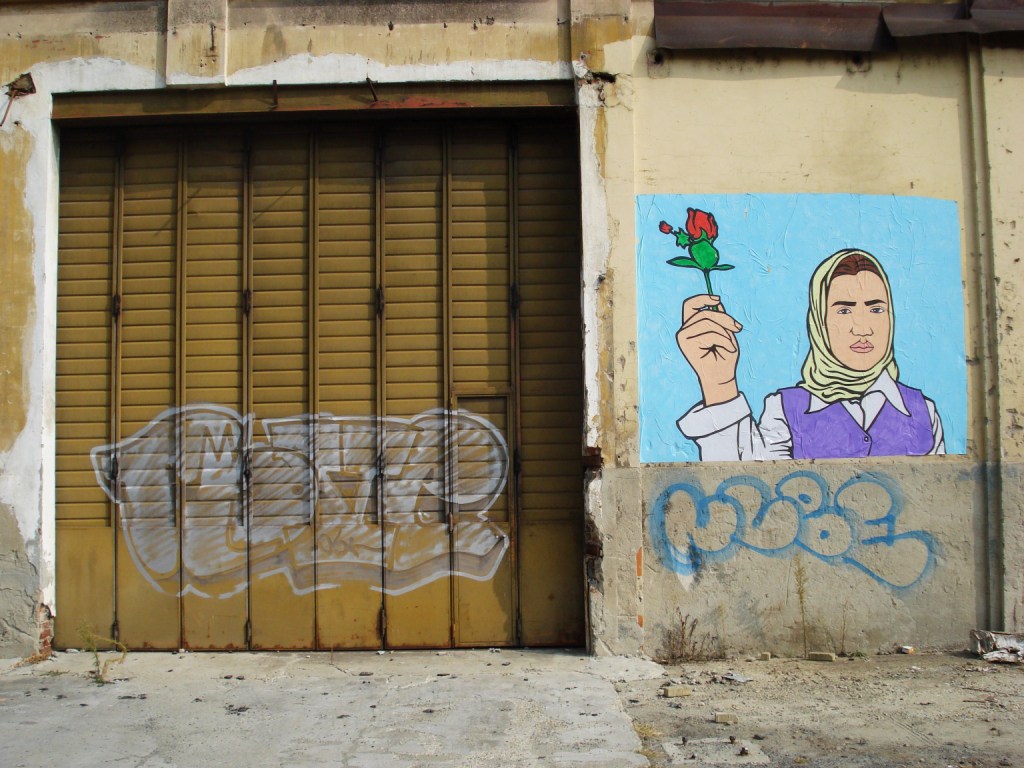 Knarf & Meersau from Austria in Paris.