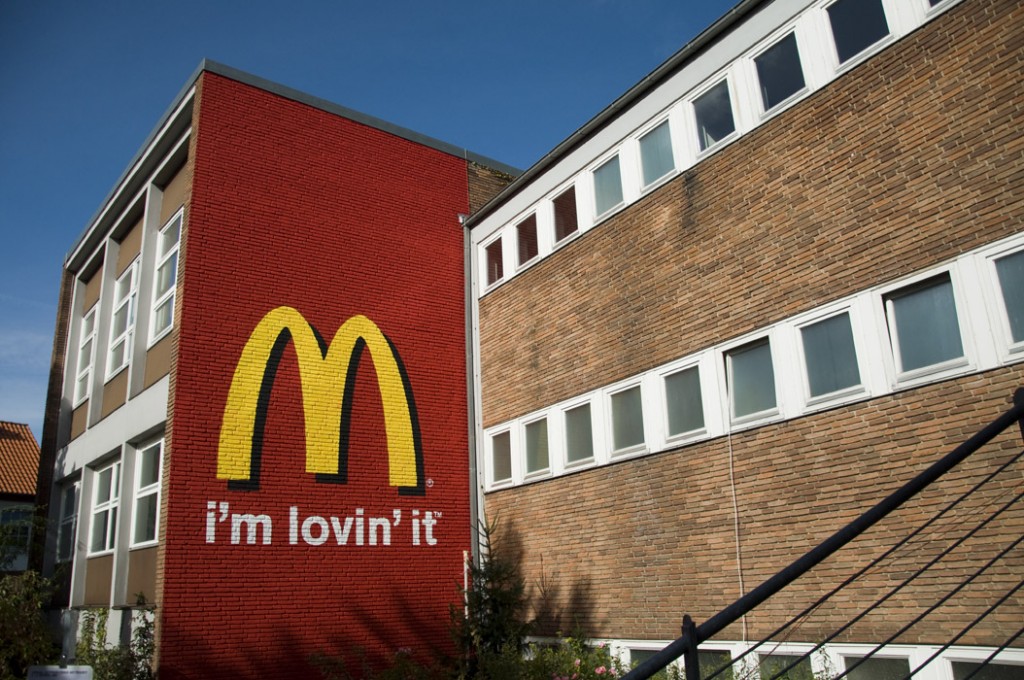 I’ve been a bit disappointed when discovering new Brad Downey piece on Just daily photo report for ARTotale.
What? Is it really finished? A giant painted Mac Donald’s ad!? No humoristic slogan? No sabotage by rats hanging around? No drips ? 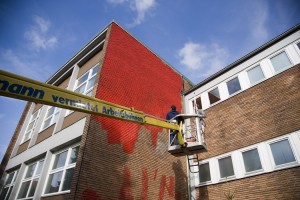 What is this piece about? Contrary to the people of Lüneburg we know Brad Downey. Is it not a real ad.
Brad, the University or the Festival organisation haven’t been paid by McD.
So is it to bring up the evil power of McD? Does it mean sponsoring a university or a soccer team is the same thing? Is taking money from private companies for education wrong? 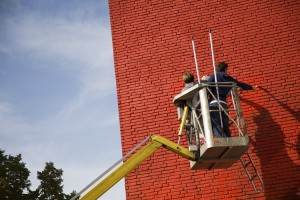 And I finally realised that –ironically- a commercial mural can finally be much more controversial & radical than a wall painted by a graffiti artist who is supposed to be an urban-rebel…! 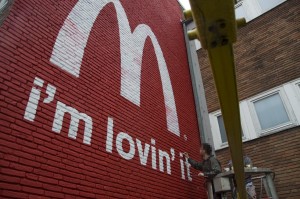 I contacted Brad Downey and I asked him a couple of questions:

Do the university and students enjoyed/understood your work?

Brad Downey: I have not heard any response from the university staff. So, I suspect they do not approve. Maybe they feel a bit cheated as I did not tell them what I wanted to paint. I maintained that my work would be created spontaneously.

The university students understood my work very well. I was very worried that the painting would be misunderstood by the students and my fellow artists. The University is undergoing a process of “Rebranding”. To my understanding, Leuphana has recently paid a large sum of money to design a new logo, name, and concept for the whole Universiy. Part of an effort to raise student fees. One student explained to me that it has been referred to internally as an Americanization of the old German school. And many of the students are unhappy about this. Some have made their own films addressing this same issue. Our ARTtotale, street art project, seems to be a part of this re-branding.

Do you think the wall will last long?

Have you already received any reaction from Mc Donald yet?

B.D: This work has nothing really to do with McD. I just wanted to insert “random logo with power.” It could have been any well know logo. I feel that many of the so called “street artists” do this anyways. They travel the world painting logos. So, I thought I should show up and just paint any logo.

B.D.: Special thanks to the The Wa (he helped paint the whole thing.) 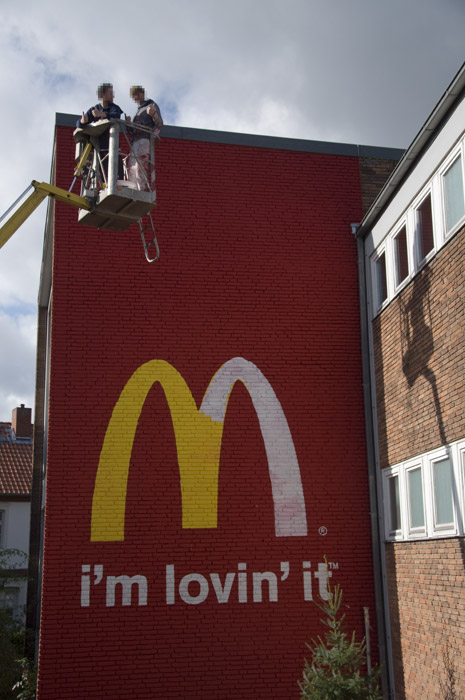 More about Brad Downey on ekosystem : interview [summer 2008]
All the photos by JUST (cc)