eko: We knew you for painting & hanging your Arrow Mobiles in the past. During your South Central Tour you didn’t paint, or hang a single arrow.  Your works for this tour were based on expanded Word/Plays, typography, compositions, and even some very colorful abstract works.
Is the arrow period totally over for you ?

Above: Every tour I have done I in the past has had a theme, style and goal for that specific tour. For the past (2004) USA TOUR the goal was to hang the then newly developed Arrow Mobiles around large cities in the United States.
The (2005) EUROPEAN TOUR’s goal was to Paint arrows, the name “ABOVE” and install wooden arrows with fabric to elevated areas of walls around Europe.
The (2006) SIGN LANGUAGE TOUR’s goal was the transitional point from just hanging a wooden arrow, to incorporating more mediums like gluing fabrics to the arrows, screen printing the fabrics, and more Word/Play combinations. If you were aware of the Sign Language tour then you know that those arrow mobile installations were rooted in a (2) 4-letter word communication theory. For example each side of the arrow has 2 sides, creating a form of communication when the arrow spun around.  This is why it was called the Sign Language tour because it was a form of communication through movements instead of sounds.

The most recent SOUTH CENTRAL TOUR (2007-2008) was to take the Word/Play concept and grow and evolve with that. With the South Central tour I started to incorporate more words, larger sizes, typography, and compositions all in a painted medium. Currently in my life I am just going with the flow of my interests and seeing where it takes me. I’m not saying that the “Arrow” period is completely over but I would say that I have a lot more interests in other mediums and applications to express myself with my outdoor works other than just painting or hanging an arrow. 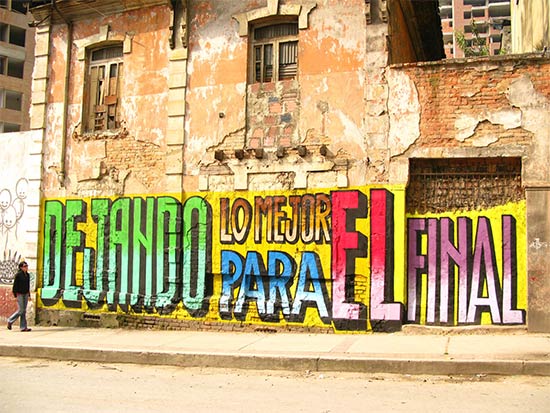 eko: You painted in many places with/without authorization. Tell us about how that was?

Above: One of the most appealing aspects of wanting to do the South Central Tour was because it was a new part of the world I hadn’t been to but also the fact that many/all of the South and Central American countries don’t really have any severe laws against graffiti. For this simple reason I wanted/could paint as much as I felt like because there were no real laws stopping me. For example in Sao Paulo and Buenos Aires I got stopped by the police at total of 5 different times and once with the officers carrying 5.56 ammo while I was painting illegally. I didn’t ask questions why they were not arresting me and taking me to jail but they just said I could not paint there and told me to leave. I’ve gone to Jail in New York City’s Central Booking for simply putting up Stickers, so you can imagine that being able to paint broad daylight illegally would be a real attraction to wanting to go there.
I would paint a lot of the time illegally during the daytime because many people on the street just thought I was doing my job. Some of the countries I visited were really poor and I when I would be painting illegally I would get approached by the local people asking what company I worked for! They just assumed I was doing some sort of ad campaign for a cell phone company

or something of that sort. I must also say that a real charm and beautiful part of South and Central American countries is their advertising. Most of the advertising on the streets are hand painted signs. This long time tradition of hand painted letters/signs made it even more the easier to paint large word/plays Illegally during the daytime as people are accustomed to this method and style. 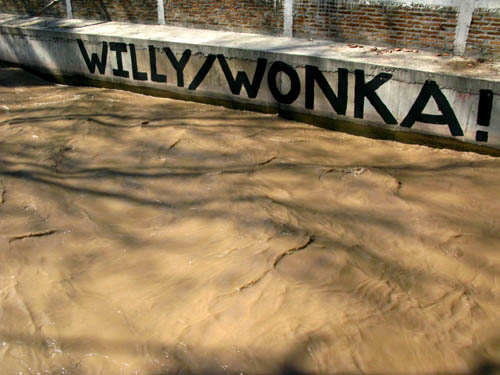 eko: How many countries did you visit and how long did the journey take ? 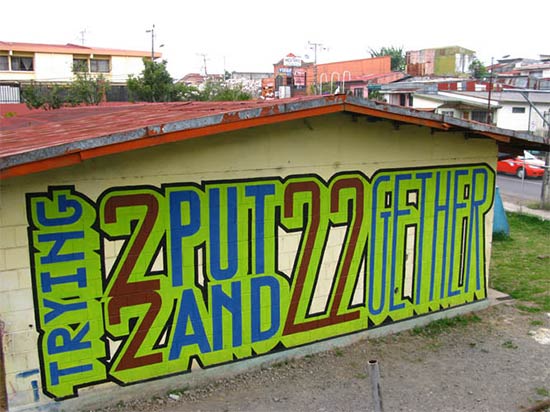 eko: Did you plan a lot of your travels (contacting people, searching place to sleep…) ?

Above: Yeah, I started contacting friends and learning more about the South and Central American countries right after I finished the 2006 Sign Language tour. Doing a lot of in-depth research about cities helped out, but also thankfully for my website and the internet in general it was easy to get invitations, and to contact artists in each country/city. I can’t say it enough how appreciative and thankful I am for the friends, and supports that make/made these long travels and tours able to happen. It could be called crazy or just blind faith but I would get emails from other artists or people in a city saying that if I was going to be passing through their city that I could stay with them, and they could show me around their city. With incredible support and a network of fellow artists I was and am able to do these travels. All the friends along the way that helped me sleep on your floor, gave me food, shared a beer together, painted with or just simply hung out together I give you a big THANK YOU. The Biggest THANK YOU is due to my friend RIPO who traveled along and did his own unique tour and paintings for the 2nd tour we traveled together. 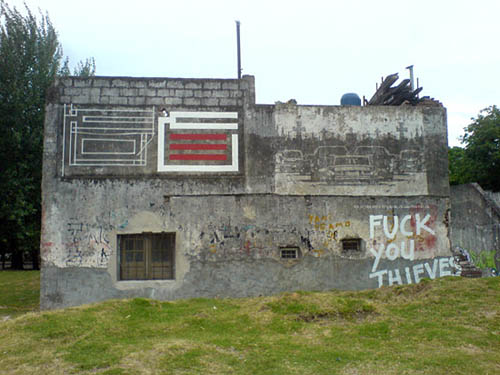 eko: You were robbed at gunpoint and your camera was stolen in Buenos Aires, how did you avoid loosing your photos during the trip ?

Above: My good friend El Tono and I were painting in a somewhat unsafe area of Buenos Aires when 2 young thieves with guns robbed us. Normally I don’t bring my camera with me when I paint for this exact reason, but because the area we were painting in was somewhat far to come back to we decided to bring them and take photos right after we finished. We should of left our cameras at home!  How I avoid loosing photos is before leaving each country/city I back up and burn off my images to DVD’s as well as leave them on my friend’s computers as well. I did loose some good photos from my camera that got stolen in Buenos Aires but it’s nothing to cry about, that’s life. 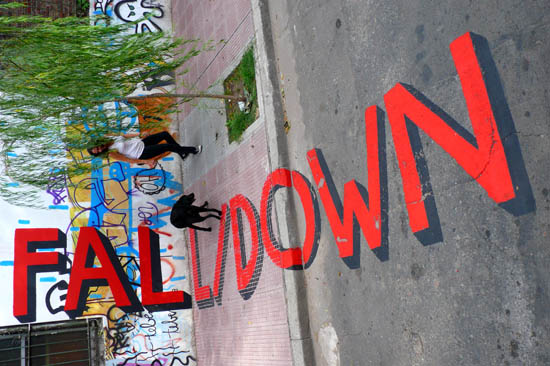 eko: According to you is there a new “Barcelona” in South/Central-America ?

Above: Along the South Central Tour I found a lot of countries and cities had little to no laws against graffiti. This makes any of those cities attractive to want to paint in but just because there are no laws doesn’t mean that there is a community or scene of artists that are pushing each other or taking it to the streets. Barcelona in the past was known for the cops being super laid back and chill as well as having a lot of active artists and writers going out every day/night to paint. These two factors in conjunction with each other make a city explode with energy, color and fuels a large growth of progression for the artists and locals alike. I saw this on different levels depending on the city but the cities I saw that had both of these crucial elements present were; Buenos Aires, Sao Paulo, and Mexico city. 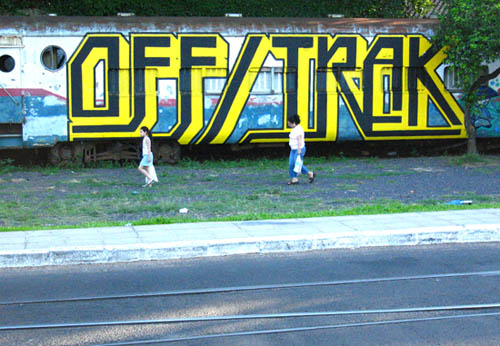 eko: What are your plans now ?

Above: Strange enough I’m typing this interview on a plane flight from San Francisco to Rome. This summer I was invited to take part in making some amazing screenprints with the Italian Printmaker STUDIOCROMIE.

I anticipate having a great time working on these projects as well as traveling around painting for 3 months in Europe. I really want to get my hands on those art printers. Aside from that I just want to keep trying to grow and challenge myself as a person and artist. I feel it’s important in my life to constantly keep pushing myself and and experimenting/taking risks with my art. The world is large and small at the same time so I want to keep venturing out to new areas of the world. 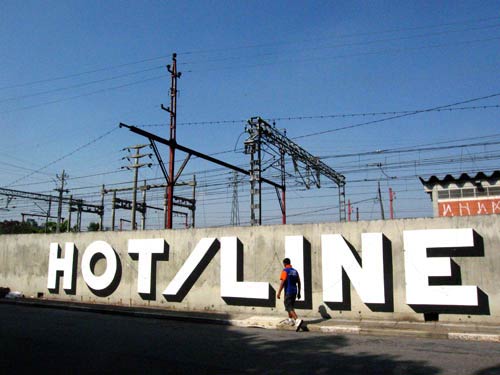 moon hanged over University by SpY

A bright moon hanged over the EPFL university campus in the city of Laussane by SpY from Madrid.

There is an exhibition in Paris of record sleeves designed by street-artists. It reminded me that I made a selection of record covers 8 years ago with original works from…