I’ve got no preference in terms of painting tools that I use.
I love paintbrushes as well as markers ;) I like the smell of both ink and paint.

…Amsterdam… I’ve been there a couple of times, but never had a
chance to collaborate with SOL CREW EINDHOVEN…. The works of Erosie
and the rest of the guys have really made a huge impression on me.

Definitely black&white…. A sharper contrast… Easier reception…
You cannot cheat, you cannot conceal a thing :)
There is power in simplicity.

When it comes to the technique and obtained effect I’d definitely
prefer stencils…I always try to merge my templates with background to
fit them in into the whole composition…A stencil enables the wall
project to go much easier and faster… It gives the final effect… On
top of that I love its phat effect… The runs, inaccuracy… These
things define my work pretty often

Definitely Dexter. I think it won’t finish well though…
I got somewhat lost around the fifth episode…
Anyhow, my wife still watches it :)

‘Both… Preferably mixed.
binarpilot, Atari Teenage Riot, prefuse73, vitalic, Animal Collective,
jan garbarek, primus, meshuggah,…I listen to all kinds of music,
depending on the hour or activities I’m involved in.

Lately it’d be vodka… Maybe it comes with age, but I have a terrible
hangover after drinking beer :)

The beginning of the digital era is a big inspiration… Great
counting machines…. The tapes… Silicon… Green computer screens….
Atari and Spectrum logos, stuff like that.

My aunt who lives in Hungary has a cousin – he used to produce fake
Playmobil toys back in the 90’s…The company name was Shenk or
something… The guy got away with it and even manage to made a pretty
good fortune…I heard he’s living somewhere with his new
30-years-younger wife :) 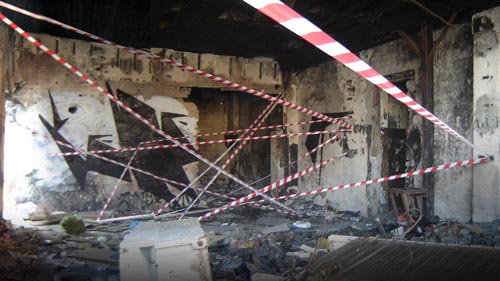